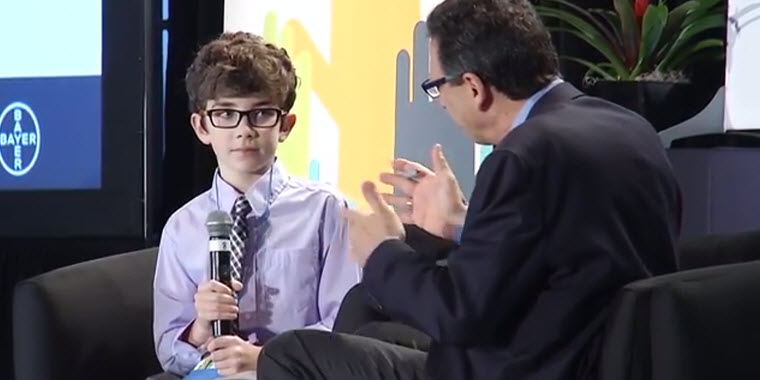 New Orleans, LA (March 2, 2016) – Feeding a growing population is a them that’s resonating loud and clear at the Bayer Advocacy Forum at Commodity Classic.

Braeden Mannering, 12, of Bear, Delaware, founded the nonprofit 3B to provide healthy food and other items to homeless and low-income people in his community. He was moved to take action after a trip to Washington, D.C., during the summer of 2013 when, as a nine-year-old, he attended the Kids’ State Dinner at the White House as part of the Healthy Lunchtime Challenge, where the President and First Lady challenged them to think about what they could do in their own communities.

The Northern Ag Network’s Russell Nemetz has this feature on Braeden Mannering and his message to attendees at the Bayer Agvocacy Forum.

As of December 2015, Braeden has spoken to groups in New York, Maryland, Pennsylvania, Delaware, Georgia and Florida. He has activated more than 2,600 volunteers, provided more than 4,500 “brown bags” of healthy food, and raised more than $52,000 for hunger relief. His ongoing mission: Feed people today and raise awareness about the problems of food insecurity and poverty, empowering and inspiring youth across the nation to become part of the solution.

Exciting Planting Options for Farmers and Ranchers this Spring

A Threat to Farm and Ranch Taxpayers (and Other Small Businesses)