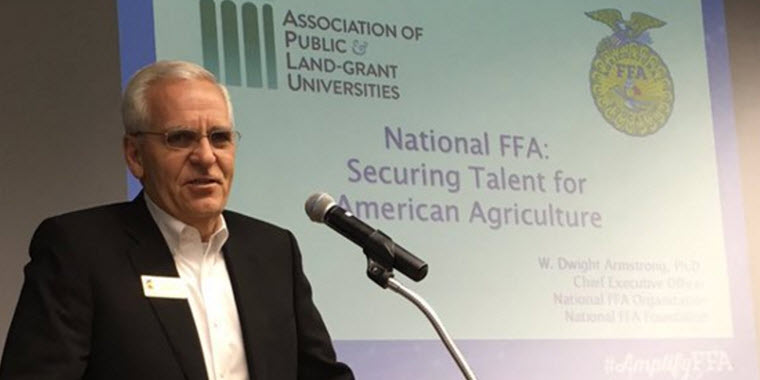 2016 Agribusiness Leader of the Year

This award, which is NAMA’s highest honor, recognizes outstanding leadership in private, public or academic service and is conferred each year to a senior agribusiness executive who not only exemplifies excellence in agribusiness but has also made significant contributions to the industry.  Now in its 16th year, the award was presented at the opening general session of the 2016 Agri-Marketing Conference, “From the Ground Up,” April 14 in Kansas City, Mo.

Armstrong has a passion for agriculture and its role in food security.  This passion has infiltrated all aspects of his life. Like other industry leaders, he appreciates the serious and urgent challenge of feeding a global population that will top 9 billion by 2050.  That is why he is focused on delivering the human capital to get that job done.  He works daily to ensure youth are being educated on issues of hunger and food security, as well as playing active roles in their communities.  Through his career, he has mentored, developed and honed many leaders around the globe.

Under Armstrong’s leadership at FFA, there has been dramatic growth in FFA student membership, National FFA Foundation contributions and attendance at the National FFA Convention & Expo.  The organization achieved an all-time record membership this year with 629,367 student members in grades 7-12 in 7,757 local FFA chapters throughout the United States, Puerto Rico and the Virgin Islands.  Attendance at the national convention and expo grew from 53,473 in 2009 to 65,173 in 2015, making it the nation’s largest student gathering.  During his tenure, financial stability was strengthened for both the national foundation and organization.  Under the banner of “We Are FFA,” Armstrong created close collaboration and complementary strategic direction for both organizations.

His leadership and service to agriculture have been lifelong, from his early years as an FFA member and his first degree in agriculture from Murray State University.  He continues to serve the industry on numerous business and not-for-profit boards including AgriCorps, Shoulder to Shoulder, The Mathile Institute and Professional Services.  He has received numerous awards and recognitions including an honorary doctorate from Purdue University and the Distinguished Service Award from the American Feed Industry Association.

Source:  The National FFA Organization provides leadership, personal growth and career success training through agricultural education to 629,367 student members who belong to one of 7,757 local FFA chapters throughout the U.S., Puerto Rico and the Virgin Islands.