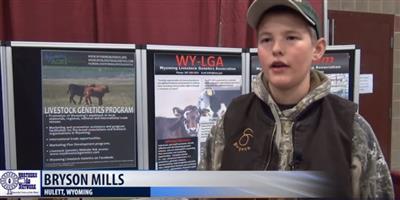 A Bright Future for these Wyoming Young Cattle Producers

Northern Ag's Lane Nordlund spoke with the Future Cattle Producers of Wyoming  about what they are doing to help the next generation get started in the cattle business.

Wyoming youth of high school age apply for heifers donated from Wyoming seedstock producers.  They go through an extensive interview process prior to selection.The donor is then selected to fit the youth, so a bond can develop between them.

The first year they go through a program of growing, breeding, and keeping records on the heifer.  They work closely with their donors to keep their focus on the long term productivity of the cow, not just preparing a show animal. The first year will be highlighted with a showcase of their program following the Supreme Cow Contest on Friday of State Fair.

At State Fair, they will have their record book judged, will participate in an extensive interview and they evaluate their heifer in from of a panel of three producers. They will receive awards for their placing in record books, interview and animal knowledge.

Year two is a continuation of the record book completion. They will be responsible for bringing a video or virtual presentation of their cow-calf pair to the State Fair. They will again be judged on the completeness of the record book, their presentation of the heifer to the 3 producer panel. The ultimate award will be a production efficiency calculation, similar to the Phase 2 award of the Supreme Cow Contest. Profitability will also be a large factor in their scores.

During the two year commitment, they are responsible to the donor to contribute to the donor’s marketing and promotion needs.

Applications are available after the State FFA Convention. Application deadline is May 29th, annually. Applicant interviews are conducted in June. Donor selection is in July. New FCPW participants are introduced at Wyoming State Fair on Friday during the FCPW awards presentations.

Early Ranchers Had to be Road Builders as Well

Unusually High Number of Quarantines Due to Vesicular Stomatitis