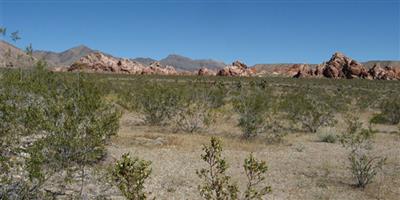 A Push for National Monument Designation Where Bundy Cows Roam

Reid has previously pushed legislation to designate a 350,000-acre Gold Butte National Conservation Area as well as 220,000 acres of wilderness protections within it, but it has stalled without the support of Sen. Dean Heller (R-Nev.).

“Because of this legislation and now the fact that the Bundys are all in jail, I'm going to reach out to the White House, no guarantee we'll get it done, that's for sure, to see if President Obama will protect this area,” Reid said in a speech this morning on the Senate floor.

Gold Butte, an arid mesa of Joshua trees, creosote bushes and Native American petroglyphs, is a favorite spot for hikers and campers thanks to its proximity to Las Vegas about 80 miles to the southwest.

Conservation groups, including the footwear company Keen, have been prodding Obama to protect the area using his authority under the 1906 Antiquities Act.

WASHINGTON (April 8, 2016) – Yesterday morning, Senator Harry Reid (D-Nev.) boasted on the Senate floor that he is actively lobbying the White House to lock off yet another large western landscape using the Antiquities Act, stating that, “Congress created the Antiquities Act to empower the president to protect our culture, our historic and natural resources when and where Congress cannot or will not.”

Below is a statement by PLC President Brenda Richards regarding Sen. Harry Reid’s unapologetic demand for further Antiquities Act abuse.

“This is further illustration that the Antiquities Act – originally intended to protect artifacts and American Indian Ruins – has been weaponized by the administration to punish rural communities. Senator Reid is out of line; instead of engaging local communities and advocating for appropriate economic and environmental review, he is asking the President to make a unilateral, punitive decision in order to settle a political score. This is precisely why the Antiquities Act is in dire need of reform.”