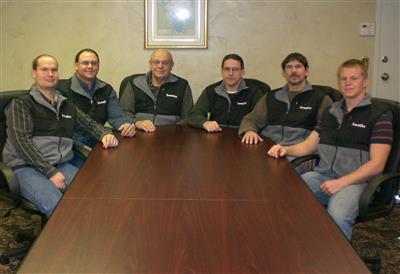 Agri-Best Feeds’ mission to provide superior agricultural products, satisfying every customer, and enhancing the lives they touch is seen throughout their history – and they are only just getting started!

Ten years ago at the Northern International Livestock Exposition in Billings, Montana, rancher Irv Haidle introduced SweetPro to the Montana and Wyoming cattle market.  At the time, Irv thought he was showcasing a new product that he would build to into a small business opportunity for himself, but it didn’t take long for him to realize this was going to be so much bigger.  Agri-Best Feeds grew from his vision into a successful family business that continues to grow and expand today.

Irv was first contacted by SweetPro Feeds back in 2004 to market their feed products in and around Montana.  Having been a rancher all his life, he was initially skeptical of the claims that SweetPro would improve the feed efficiency of the forage for cattle and that the cattle would eat up to 25{e1c719bd29d6bb84a792d8ffcb03a61a093900316f2da3efbd39b86f03d248b8} less hay.  It was a whole different approach to feed supplementation.  Most supplements currently in the market  stimulate appetite so that the cattle eat more, but this product claimed to help the livestock utilize their feed better so that they actually eat less and perform better.

[EasyDNNGallery|4762|Width|400|Height|400|position|left|resizecrop|False|lightbox|False|title|False|description|True|redirection|False|LinkText||]Bob Thornberg, president of SweetPro Feeds, contacted Irv again in 2005 about selling the product but first, Irv wanted to test out the product on his own cattle.  The first trial went well, but he still wanted more proof so he also did a follow up trial in early 2006.

“He was actually 2 years into it before he was confident enough to put his name behind it,” said Scott Anderson, Agri-Best Feeds Director of Operations and Irv’s son-in-law.  Bob Thornberg agreed, “Irv needed to prove the claims to himself.  And when he saw the results, he jumped into it with enthusiasm.”

For his trial, Irv put mature cows on test in a dry lot with eight round bale feeders, with the supplement that he had been using, and monitored the number of days that it took his cattle to consume the hay. He then replaced his supplement with SweetPro, refilled the bale feeders, and in a six-week timeframe, found the hay lasted 28 percent longer with SweetPro.  He able to duplicate the trial results two years in a row so he decided take his experience on his own ranch to market SweetPro.

Irv was a big visionary and from that first NILE show in 2006, he saw that there was an interest in this new product well beyond what he would be able to handle himself.  Based out of his ranch in Fallon, Montana, Irv began to set up a network of dealers.  His business began to build rapidly in eastern Montana and he knew if he wanted to grow and cover the entire state that he could not do it all himself.

[EasyDNNGallery|4764|Width|450|Height|450|position|right|resizecrop|False|lightbox|False|title|False|description|True|redirection|False|LinkText||]“Through that first season, 2006-2007, Irv began to talk to the family and really started looking at which way to go with this business.  One option was being a big dealer located in the Fallon/Terry area and just service what he could in the local region or look at developing a larger business structure that would be able service all of Montana and be able to get product moved efficiently and effectively.  To do that he would need more help.  Irv started talking to his family and wanted to make a family business out of it. The family agreed with him and Agri-Best Feeds was incorporated in April of 2007,” Scott said.

Scott joined Agri-Best Feeds in 2007 as the Director of Operations to help with the accounting and help move the company into the computer age.

“As things really started rolling, it was pretty obvious that Billings would need to be the hub of our business,” said Scott

Scott and his wife Kim moved to Billings and initially started selling SweetPro out of their garage in Shepherd, while Irv continued working in eastern Montana.  His son Daryl Haidle joined the team as the Distribution Manager in 2008 and his grandson-in-law became the business manager in 2009.

[EasyDNNGallery|4763|Width|450|Height|450|position|left|resizecrop|False|lightbox|False|title|False|description|True|redirection|False|LinkText||]By 2009, the business was growing rapidly and their distribution base now covered Montana, Wyoming and Nebraska.  Agri-Best Feeds also started adding to their product line.  Looking for distribution in the same geography, Redmond Natural Trace Mineral connected with Agri-Best Feeds to add their products to Agri-Best Feeds product line.  Redmond Natural Trace Mineral is a mined sea salt that contains 60+ minerals in their natural balance.  It seemed like a natural addition to the Agri-Best Feed program of your forage + SweetPro + salt = a complete balanced ration.

In January of 2010, Agri-Best Feeds moved their distribution and operations headquarters into the former Pierce Packing Plant building, now known as the Kairos Center, at 47 North 15th Street in Billings.  They saw the location as ideal for serving customers and distributors locally and throughout Montana and Wyoming.  That same year, Agri-Best Feeds was awarded the Family Business of the Year by Montana State University, College of Business.  Dr. Abe Schaefer also joined the team in 2010 as a nutritional consultant.

In September of 2011, Irv Haidle was killed in an automobile accident.  With the infrastructure in place and Irv’s clear vision for the future of the company, the family was able to pick up the reins and continue the business.  Two generations of Irv’s family are actively involved the family business and Irv’s son, Kevin Haidle, was named President of the company in 2012.

[EasyDNNGallery|4761|Width|450|Height|450|position|left|resizecrop|False|lightbox|False|title|False|description|True|redirection|False|LinkText||]What does the future hold for Agri-Best Feeds?  While obviously very proud of what they’ve accomplished so far, Scott says they are just getting started.  “We haven’t even started to scratch the market potential.”

With the addition of another regional warehouse and farm store in Callaway, Nebraska, Agri-Best Feeds now covers a four state area, including Montana, Wyoming, Nebraska, and northern North Dakota.

Scott Anderson said, “Revenue and sales growth has continued to grow year after year, started from nothing to 142 truckloads of SweetPro and 70 loads of Redmond last year.”

Bob Thornberg was very enthusiastic in his support of how Agri-Best Feeds have expanded and grown their business.  “We are delighted with everybody at Agri-Best Feeds and all they have done with SweetPro.  Agri-Best Feeds has consistently either been number 1 or in the top 2 or 3 in the nation for sales.”

“As we continue, we would like to basically double or triple our business in the next three years and really put a concerted effort into continued growth.  The infrastructure is already in place to support that growth, so it’s a matter of continuing to work with and focus on our dealership network and helping our sales reps spread the word,” said Scott.

Keeping in line with their innovative products, Agri-Best Feeds team continues to reach out to their customers, producers and dealers utilizing technologies like webinars and social media such as Facebook.

[EasyDNNGallery|4765|Width|450|Height|450|position|right|resizecrop|False|lightbox|False|title|False|description|True|redirection|False|LinkText||]However, they still see the value in “boots on the ground” and make a point to drive out to see many of their customers face to face or visiting with them at Ag Shows like the NILE.  Gwen Shepperson, a Wyoming rancher, SweetPro dealer who has been with Agri-Best Feeds since 2007, and runs Agri-Best Feeds’ Facebook agreed.  “They are always willing to travel and see their products working.  We had Kevin Haidle out with their nutritionist Dr. Abe Schaefer this summer and they went all over the ranch.  They like to be involved and I think producers can appreciate that because they don’t just want someone to sell them a product, they want a company that’s invested in their wellbeing as well.”

Although there are plenty of supplements to choose from, no one has the same approach as Agri-Best Feeds, according to Scott, to offering a program that blends animal health and performance, forage utilization (true feed efficiency) and producer profits, which why he feels their future is bright.

Bob Thornberg added, “Interesting thing with Agri-Best Feeds is that they see the marketplace as growing pretty significantly because we’ve been out there steady now for 10 years.  We were really brand new 10 years ago and everybody wants to know if you are going to stick around.   Agri-Best Feeds is finding that after 10 years they are expecting more significant growth even now.  The customers know Agri-Best Feeds.  They know they can benefit from them and it’s a great group to do it with.”

For more information on Agri-Best Feeds, stop in and see them at their corporate offices and store at 47N 15th Street in Billings, MT, by calling 866 601-6646 or visiting their website at www.agribestfeeds.com.

A Look at what the NILE has to Offer this Week