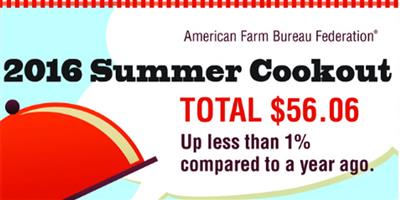 A cookout of Americans’ favorite foods for the Fourth of July, including hot dogs, cheeseburgers, pork spare ribs, potato salad, baked beans, lemonade and chocolate milk, will cost slightly more this year but still comes in at less than $6 per person, says the American Farm Bureau Federation.

Farm Bureau’s informal survey reveals the average cost of a summer cookout for 10 people is $56.06, or $5.61 per person.

Although the cost for the cookout is up slightly (less than 1 percent), “Prices in the meat case are starting to look better from the consumers’ perspective,” said Veronica Nigh, an AFBF economist. “Retail ground round prices are trending lower,” she noted, pointing to the nation’s cattle inventory and commercial beef production, which continue to rebound from dramatically low levels in 2014 and 2015.

“On the pork side, commercial production also continues to grow and is at the highest level in 25 years,” Nigh said. Spare rib prices are about the same as a year ago, while the amount of product in cold storage is up 121 percent, Nigh pointed out. “This is helping mediate the normal seasonal upswing in spare rib prices we typically see around the July 4th festivities,” she said.

In Montana, prices for most picnic foods were significantly less than the national average, including spare ribs, hot dogs, hamburger and hot dog buns, deli potato salad and corn chips. Although watermelon rose in price due to flooding in the south, the cost of a Montana watermelon was about half of the AFBF survey. The only items more expensive in Montana than the national average was ground round and baked beans.

“When you look at the overall cost of the summer picnic, all that tasty American-style food for under $6 is a great bargain. We are fortunate in this country that food is so affordable,” noted Montana Farm Bureau shopper Janet Krob. “What better way to celebrate this national holiday than with beef, potato salad and baked beans.”

A total of 79 Farm Bureau members (volunteer shoppers) in 26 states checked retail prices for summer cookout foods in mid-June at their local grocery stores for this informal survey.

The year-to-year direction of the marketbasket survey tracks closely with the federal government’s Consumer Price Index report for food at home. As retail grocery prices have increased gradually over time, the share of the average food dollar that America’s farm and ranch families receive has dropped.

“Through the mid-1970s, farmers received about one-third of consumer retail food expenditures for food eaten at home and away from home, on average. Since then, that figure has decreased steadily and is now about 17 percent, according to the Agriculture Department’s revised Food Dollar Series,” Nigh said.

Using the “food at home and away from home” percentage across-the-board, the farmer’s share of this $56.06 marketbasket would be $9.53.

Support the Bypass Channel, Save the Farmer AND the Fish!

A Look at Calf Prices at the Northern Livestock Video Sale