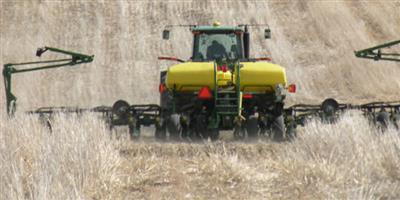 Agriculture’s greenhouse gas emissions fell more than 4% percent from 2019 to 2020, according to the U.S. Environmental Protection Agency (EPA). The most recent Inventory of U.S. Greenhouse Gas Emissions and Sinks shows agriculture continues to represent just 10% of total U.S. emissions, much lower than other economic sectors.

American Farm Bureau Federation economists analyzed the data from EPA in the latest Market Intel. 2020 overall emissions from agriculture fell at least 4.3%, or 28.8 million metric tons, compared to 2019. Emissions from agricultural soil management like fertilizer application and tillage practices were reduced by 8.4%.

“The most recent numbers show America’s farmers and ranchers are dedicated to feeding America’s families while remaining committed to improvements in sustainability,” said AFBF President Zippy Duvall. “Farmers are dedicated to doing even better through voluntary, market-based incentives that allow them to capture more greenhouse gases while meeting growing food demands here at home and abroad.”

Compared to 70 years ago, farmers and ranchers are getting almost three times more out of their production than what they put into it. Per unit emissions continue to decrease among livestock as well, a 21% reduction in pork, 26% in milk and 11% reduction of emissions per unit of beef production.

For agriculture, production of food is important not just for farmers and ranchers, but also for the millions of families in the U.S. and around the world that U.S. agriculture feeds. When considering productivity gains compared to agricultural emissions, agriculture has been remarkable at sustainable intensification, in addition to adding practices that even further shrink its environmental footprint. These improvements have been in crop yields, animal nutrition and breeding. When compared to 1990, the U.S. is producing 77% more pounds of pork, but decreasing its emissions per unit of pork production by 21%; the U.S. is producing 51% more milk than in 1990 but has decreased its per unit of milk production emissions by 26%; and U.S. farmers and ranchers are producing 18% more beef while reducing beef production per unit emissions by 11% since 1990.

Not only have producers focused on improvements to production and sustainability, but they have also focused on feeding more families, in the U.S. and globally. Since 1990, U.S. agricultural emissions have increased by 6%, but the U.S. population has increased 33% in that same period of time, adding over 81 million people in three decades. This means U.S. agriculture has been called upon to feed more people than ever before. With the advancements in innovation and technology, agricultural emissions per capita have declined 20% since 1990.

During 2020, U.S. emissions from all man-made sources totaled 5.9 billion metric tons in CO2 equivalents, a decrease of 9% from 2019, largely due to impacts from COVID-19. When taking into consideration carbon trapped in the soils through forestry, grasslands, wetlands and cropland, U.S. greenhouse gas emissions were reduced by almost 13% to a net emissions level of 5.2 billion metric tons, a decrease of 10.6% compared to 2019, and the lowest emissions level on record.

Emissions related to agriculture totaled 635 million metric tons during 2020, down more than 4.3% from the previous year. Based on Intergovernmental Panel on Climate Change methodology, U.S. agricultural emissions totaled 594 million metric tons in 2020, a decrease of over 4.5% compared to 2019. As a percentage of total U.S. emissions, U.S. agriculture continues to be just 10% of all greenhouse gas emissions, with livestock-related emissions about 4%.

When factoring in productivity and population gains, however, both per unit and per capita agricultural emissions are declining. That means U.S. agriculture is producing more food, fiber and renewable fuel for more people while using fewer resources and emitting fewer greenhouse gases. The additional efforts to adopt conservation practices through voluntary, market-based incentives have helped farmers and ranchers trap 759 million metric tons of carbon in the soils, representing 12.7% of total U.S. emissions.

The latest report shows that when agriculture is recognized as a partner in reducing greenhouse gas emissions, farmers and ranchers have more opportunities to utilize voluntary, market-based incentives that work to reduce environmental footprints while helping farmers and ranchers economically produce the food, fiber and renewable fuel U.S. families, and the world, rely on. With additional investment in agricultural research, farmers and rancher can be part of the development of new cutting-edge plant and animal technologies that capture more carbon in the soil and reduce livestock-related emissions, while generating multiple environmental benefits.