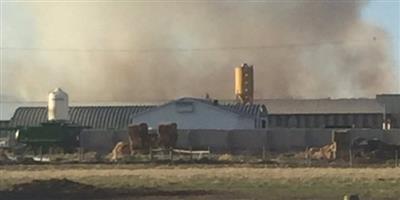 HELENA – A barn fire on the Milford Hutterite Colony between Wolf Creek and Augusta killed an estimated 3,100 pigs.

Sgt. Alan Hughes with the Lewis & Clark County Sheriff's Office says the fire was called in at around 5:30 p.m. on Monday.

The first few calls were initially reports of smoke coming from the barn.

However, Hughes says by the time the first deputy arrived on scene shortly after 6 p.m., flames were shooting upwards of 40 feet in the air.

Firefights from Milford Colony, Augusta Fire, and the Montana Department of Natural Resources & Conservation finally extinguished most of the fire by about 9 p.m., although hot spots remained throughout the night.

Sgt. Hughes says the barn is a total loss and all of the 3,100 pigs were killed.

There's no estimate on the cost of the damage and the State Fire Marshal is investigating the cause.

There were no reported injuries to any people.