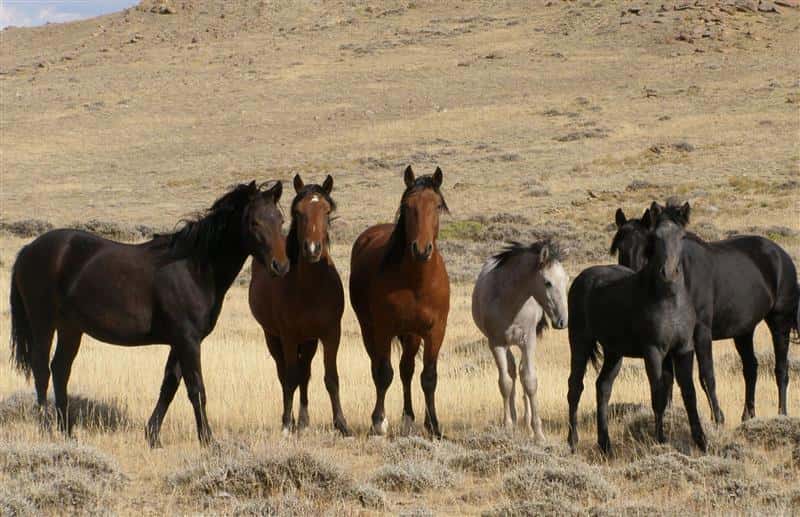 WASHINGTON – The Bureau of Land Management has started testing a  new fertility control vaccine that could help address the growing overpopulation of wild horses on public rangelands. Researchers believe the Oocyte Growth Factor (OGF) vaccine, administered to a captured wild mare through a single dose, may safely prevent pregnancy for up to three years or longer.

Following an environmental analysis and final decision record issued last March, testing of the vaccine began May 12 and is taking place in Carson City, Nevada as part of a joint research project between the BLM and the U.S. Department of Agriculture (USDA), Animal and Plant Health Inspection Service’s National Wildlife Research Center.

“For decades, the BLM has sought a long-term vaccine that could help effectively and humanely control the rapid growth of wild horse and burro populations on public lands,” said BLM Deputy Director for Policy and Programs William Perry Pendley. “Now more than ever, an all-of-the-above approach is needed as a rapidly growing overpopulation of wild horses and burros threatens the long-term health of our public lands. With the start of this trial, the BLM has taken a big and important step forward to developing better, more effective population management tools that can help solve this growing crisis.”

As part of the project, 16 previously gathered wild mares were treated with the fertility control vaccine and will be placed in a pen with a stallion once the vaccine takes effect. Researchers will monitor the mares’ response to the vaccine and compare the results to a control group. The BLM-supported project follows a previous study that safely and effectively tested a multi-dose version of the OGF vaccine in domestic horses. The BLM seeks an effective one-dose version.

Though the research is still in its very early phase, if proven viable, the OGF vaccine could help bolster existing methods used by the BLM to manage wild horse populations. The most common fertility control vaccines for wild horses in use today are short-lasting and require near-annual retreatment to remain effective. A single-dose vaccine that can last multiple years, such as the OGF vaccine if proven viable, would provide a number of benefits for BLM, including requiring fewer instances of gathering animals for retreatment or permanent removal.

The new fertility control trial comes as BLM releases annual wild horse and burro population estimates showing widespread overpopulation in herds across the West. The estimated population of approximately 95,000 wild horses and burros is the most ever estimated by the agency and compares to approximately 27,000 that roamed the land when the animals became federally protected and managed under the 1971 Wild Free-Roaming Horses and Burros Act.

Without intervention by management officials, wild horse and burro herds on public lands increase rapidly – doubling in just 4-5 years. Many herds rely on arid environments with little water or forage. Constant overpopulation can stress critical ecosystems to the brink, causing severe damage to riparian and rangeland resources that, if capable of recovery, can take decades to do so.  Moreover, overpopulation leads to the inhumane death of the horses and burros from thirst or starvation.

In addition to supporting the development of better fertility control tools, the BLM has taken action to curb overpopulation and protect land health. For example, since 2018 the agency has gathered more wild horses and burros from overpopulated herds than the previous five years combined. In addition, the BLM has also taken steps to reduce the number of unadopted and unsold animals in its off-range holding facilities. Thanks to a new incentive program launched last year, the BLM hit a 15-year high in Fiscal Year 2019 for adoptions and sales of excess animals.

Table 1: Wild Horse and Burro Population Estimates as of March 1, 2020, by State 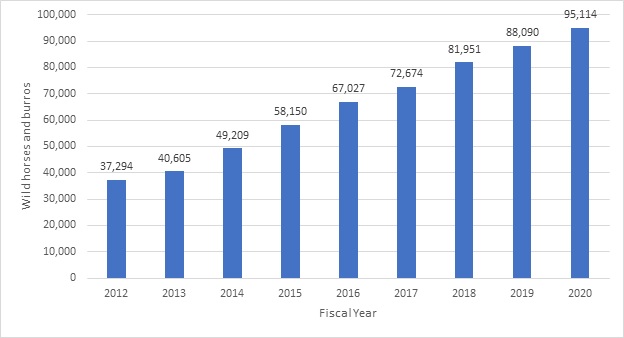 This is a very interesting article. I have been in contact with the BLM, USDA and others about our system, which is in pilot testing now. As you know, making a vaccine is one thing, but getting it to them is another. Dealing with problems on a 20K ranch I manage alone, I investigated how to get vaccines to the feral/wild horses. After years and putting a team together we created a system that attracts horses in using bait. Once in position, we can deliver a contraceptive vaccine or any vaccine for that matter. We can also implant a read an RFID microchip since knowing which horse has received a vaccine is important so populations are not over or under-vaccinated. Since our average dart shot is less than 7 inches away, the velocity is very low and horses return almost immediately which allows for continuous monitoring, boosters, etc… We believe it could also be used to cull the most adoptable to save millions to taxpayers on horses that are rounded up without adopters. Lastly, we believe it could be modified for other species such as feral swine and deer in urban areas. We have a short video on our website which is listed below on your submission form is you are interested. The system is patented and we hope can make a big difference for wildlife managers. We have created a unique dart that can deliver OGF since it is already very close to the consistencies of GonaCon, which we are currently pilot testing. Let me know if you have any questions. Great article!