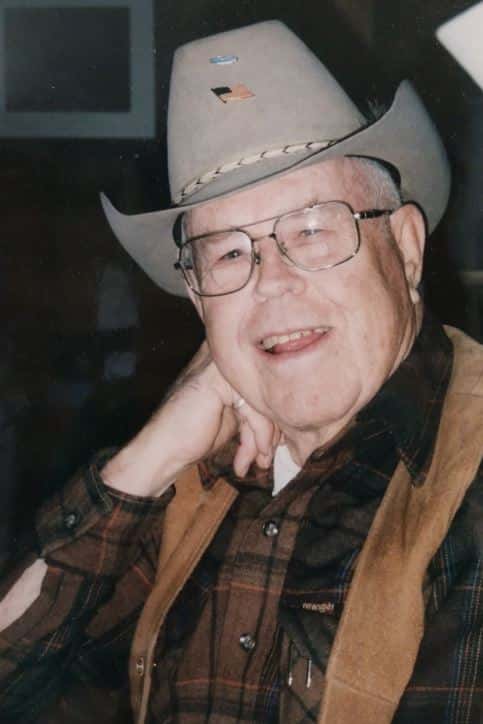 Montana has lost one of the most respected Rangeland experts in the state’s history.

Bob Ross loved the science of good range management, and long after his career with the Soil Conservation Service, he continued to donate his time and talent to helping ranchers, conservationists, and students learn to understand and appreciate the science of rangelands and grazing.  Bob was an active member of Alpha Gamma Rho fraternity, and an inductee into the Montana Range Days Hall of Fame.

A talented communicator with an amazing sense of humor, Bob was well-known for publishing a series of books titled “Muddled Meanderings in an Outhouse”, with his down-home philosophy put to rhyme.

With the passing of Bob Ross, Montana’s rangelands, and our state grass Bluebunch Wheatgrass, in particular, just lost one of its biggest advocates!

Below is Bob’s official obituary:

Born July 11, 1921, in Roundup, Montana, to Joseph A. Ross and Elsie C. Hogan, Bob was the 6th of 7 children.  Bob was raised in the Bull Mountains of Musselshell County.  He attended a one-room rural school, then in Musselshell, and graduated from Billings High School.

Bob was a proud Army Veteran of WWII.  He fought and was wounded in France.  His many decorations include Purple Heart, 2 Bronze Stars, a Silver Star, and, in 2015, the French Legion of Merit.  While living in Hollywood, CA, before being discharged from the Army, Bob met Nancy Gene Danielson.  They married in Los Vegas, NV, June 1, 1946. They had 3 children: Judy, Tim and JoAnn.  Nancy was Bob’s partner in all his endeavors until her death in 2012 after 66 years of marriage.  In 2013 Bob was able to travel with other veterans on a Big Sky Honor Flight to Washington, D.C., to visit the WWII Memorial.  Although Bob has missed Nancy terribly, the trip reenergized his life.

In 1947 Bob and Nancy left California to return to Montana.  Bob graduated from Montana State College in 1949 in Range Management.  While at MSC, he was active in the Alpha Gamma Rho fraternity, continuing active support for 50+ years as an alumnus.

In 1949 he became a member of the Society for Range Management.  Following college Bob worked for the Soil Conservation Service from 1949-1977, starting in Choteau, moving to Whitehall in 1951 and to Bozeman in 1965.  While in Whitehall he worked with FFA and 4-H youth in addition to local farmers and ranchers.  He and Nancy were active in Whitehall Saddle Club, Boy Scouts and many others.  Bob joined Rotary and remained active for 50+ years.  The 4-Way Test became a cornerstone for his everyday life.  Always aiming to improve himself, he joined Toastmasters in Bozeman.

In 1954 Bob became Range Conservationist for the western 1/3 of Montana and in 1965, State Range Conservationist.  He taught sound range management principles and practices at every opportunity through development of conservation plans with ranchers, Society for Range Management activities, his Range Tips column, MT Youth Range Camp, Ag Lenders Range School, and Montana Range Days to name only a few.  Bob was instrumental in Bluebunch Wheatgrass being designated as Montana’s state grass.

After Bob’s retirement from SCS in 1978 he continued to be active in range management organizations, education, and causes.  He worked tirelessly for years to bring attention to severe overgrazing in Yellowstone National Park resulting from overpopulation of bison, elk and big horn sheep.

Many people will remember his slide show presentations and books of verse on “Muddled Meanderings in an Outhouse.”  Bob participated in Cowboy Poetry gatherings across the western US and Canada.  He was inducted into the Cowboy Poets Hall of Fame in 1989.  Bob and Nancy enjoyed travelling.  They crisscrossed the US and western Canada for meetings and special events and to visit family and friends.  Trips to Scotland to investigate family roots, Europe for Military reunions, Mexico, Australia and New Zealand were highlights.

Bob was a mentor and role model to many in his work and his personal life.  He and Nancy made countless people welcome in their home or at their cabin.  Bob was a favorite with his grandchildren and his many nieces and nephews.  Time spent with family and friends was very important to him.  A familiar voice on the phone, a note in the mail box, or a knock on the door was always a welcome event for him.