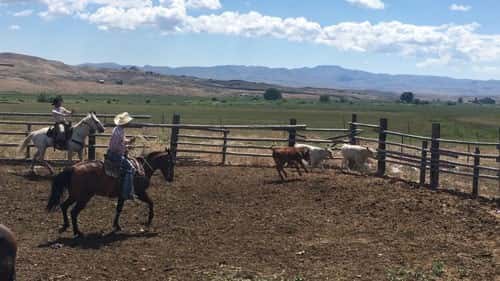 Branding: The Debate of the Ages Has Some New Science Behind It

Every spring, and sometimes fall, ranchers gather around the fire to mark their ownership on their calves.

This is the time when calves are vaccinated, dehorned – their horn grow plates are cauterized to prevent further growth ­– and, if it’s going to be a non-breeding bull, castrated.

Until recent years, ranchers roped calves to capture and restrain them while they were branded. But the advent of the squeeze chute and calf table drastically changed how livestock are handled, igniting a debate: which is better, the calf table or roping at branding time?

There hasn’t been empirical evaluation of these practices to begin settling the debate. Until now.

They evaluated cortisol levels in 48 calves across four of the most common restraint methods. They chose to test for cortisol because it’s known as the “stress hormone” – its levels in the body indicate the discomfort of an individual animal. They took blood samples a week before branding and then sorted cow/calf pairs into four treatment groups.

In three of the groups, they separated the cows and calves with three capture-and-restraint methods: calf table, heel-only roping, and head-and-heel roping. In the fourth group, calves and cows were kept bunched together in the rodear. They roped the calves out of the rodear with head-and-heel roping, as was traditionally done before corrals were prominent.

It’s important to note that the handling crew was the same throughout the study to minimize handler bias. They were all experts in the fields of stockmanship, horsemanship and ranch roping.

All of the calves in this study were captured, and properly restrained, before they were branded with a hot iron, vaccinated, castrated, and dehorned before researchers collected a second round of blood samples. The samples were processed at Texas A&M University.

The findings suggest that the physical act of branding, vaccinations, castration, or dehorning is not as stressful to calves as the separation from their mother. We know that livestock have evolved to tolerate pain in order to escape predators, even after being bitten, cut, or scratched. But the psychological stress of separation on calves of this size is not something that occurs in nature, and so the elevated cortisol levels occurred in all of the separated groups.

The crew used in this study were selected because they are able to work in the herd calmly and rope effectively. Handlers/ropers kept the animals calm and did not miss very often, so these factors need to be taken into consideration along with the results of this study.

In conclusion, this study featured two major findings. First, roping does not inherently cause more stress for cattle. Second, if calves need to be separated, the quicker they can be joined to their mother the better.

The study was funded with a $12,500 grant from the Agricultural Research Foundation.

USMCA Clears The House In A Landslide Vote

So true! You will also notice that calves that were roped were less stiff and sore the next day then calves that were worked in a chute, due to the fact that the ropes will give to the calves where the steel chute do not. We rope our calves out of the herd for years and yes less stress the don’t run around the pen so much as if they were just a pen of calves.

And, with the calf table, you can’t get much help.