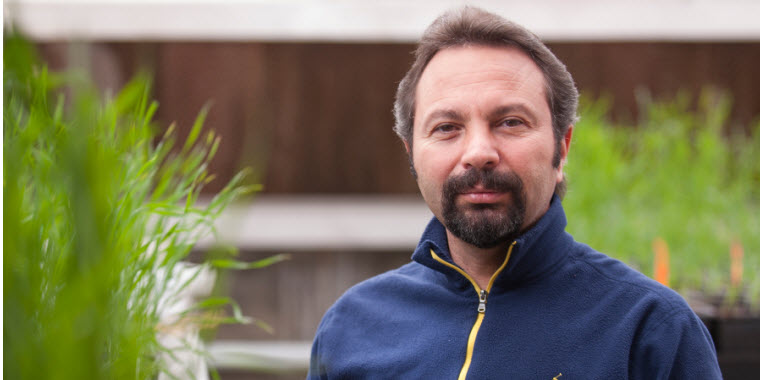 BOZEMAN – A scientist raised near the area in Turkey where wheat was first domesticated nearly 10,000 years ago is bringing the newest contemporary technologies to Montana State University to strengthen the vitality of Montana wheat.

Hikmet Budak, MSU’s first Montana Plant Sciences Endowed Chair, arrived in Bozeman from Sabanci University in Istanbul, Turkey. The focus of his work will be using cutting edge research to help the university develop wheat that will stand up to the four traditional stressors of Montana’s most important crop – wheat stem sawfly, drought, heat and micronutrient deficiencies.

“We cannot afford to ignore any technology to combat these stressors,” he said.

The first endowed chair in the history of the MSU College of Agriculture and Montana Agricultural Experiment Station, or MAES, Budak was hired following a national search that ultimately attracted top cereal scientists from around the world. The idea for the position began as an idea of the Montana Grains Foundation as a way that would help Montana’s wheat farmers stay sustainable and remain competitive. More than 60 Montana grain producers and several agribusinesses around the state partnered to support the endowed chair.

Budak, 45, is an internationally recognized scientist who earned his doctorate in plant genetics at the University of Nebraska-Lincoln in 2002. He returned to Turkey, where he received the Turkish Young Scientist award in 2006. He is also the recipient of an achievement award by WORLCOMP06, USA.

Budak has authored or co-authored more than 100 publications in peer-reviewed journals and his work has attracted more than $2.5 million in funding from TÜBİTAK (the Scientific and Technological Research Council of Turkey), the European Commission and U.S. funding agencies. He also has been actively involved in leadership for wheat improvement projects sponsored by the European Union.

At MSU, Budak is a member of the faculty in the MSU Department of Plant Sciences and Plant Pathology. Along with MAES, the department conducts research addressing challenges for Montana’s agricultural industry. Sustained by permanently invested funds, endowed chairs – which are often the highest academic award universities bestow on faculty – provide predictable and stable funding to help the university build upon its existing academic and research programs. Budak will work with an advisory council made up of representatives from Montana’s cereal grains production industry and will actively collaborate with breeders, entomologists and plant pathologists in integrative research.

Budak said the state-wide support and financial commitment that will enable him to build one of the best wheat genetics and genomics labs in the country as well as the opportunity to do significant work in wheat genetics attracted him to the position. Results from his lab will be used in the field, he said, to help the vitality and production of wheat in Montana, the state’s largest crop.

Budak said one of his priorities will include researching new genetically based management that will help Montana grain growers stay sustainable and remain competitive despite periodic drought, heat and pests, particularly the wheat stem sawfly.

The wheat stem sawfly is an aggressive insect that has had devastating effects on wheat production in North America. The U.S. Department of Agriculture has estimated a gross national loss of $350 million, with 2012 losses in Montana estimated around $80 million. A study from MSU’s Department of Agricultural Economics and Economics found that in some cases, individual Montana wheat farms annually lost up to $120,000 from damage by the pest. The sawfly’s ability to adapt to changing environmental and production conditions over the past few decades has made it one of the greatest threats to wheat producers in Montana and the Northern Great Plains region, according to Anton Bekkerman, MSU professor of agricultural economics.

“In addition to combating biotic and abiotic stressors, we will be looking at micronutrient deficiency. Malnutrition is a problem in the world,” Budak said. “We will look for a way to help people by increasing the nutrients in wheat.”

Budak said he looks forward to traveling throughout the state this summer during Agricultural Research Center field days and seeing for himself Montana’s famous wheat fields.

“Everything we do in this lab will be applied to better wheat in the field,” he said.

Hikmet Budak, MSU’s first Montana Plant Sciences Endowed Chair, arrived in Bozeman from Sabanci University in Istanbul, Turkey. The focus of his work will be using cutting edge research to help the university develop wheat that will stand up to the four traditional stressors of Montana’s most important crop – wheat stem sawfly, drought, heat and micronutrient deficiencies. MSU photo by Sepp Jannotta.