Canadian Bovine Tuberculosis: Not the Only Case this Year in the U.S.

Earlier, Northern Ag Network shared a report from CBC News that 30 southeastern Alberta ranches are being quarantined after Bovine Tuberculosis was reported in a single cow that was sent to slaughter in the United States.  Now the question is, what is the impact of this case of TB for U.S. producers?

According to Dr. Zaluski, “This is certainly a concern for those ranchers and we never want to see TB in any animal. But, certainty not in ones that are received from across the border.”  He also added that this is just one of ten cases of TB found in the United States during this fiscal year.  However this is the only case attributed to cattle of Canadian origin. The other nine cases stemmed from fed cattle coming from Mexico, and a few of those cattle were unable to be traced.

For himself, Zaluski said this is a great concern. He emphasized that people should not jump to conclusions. There still needs to be more information to verify if this is a wide spread problem or just a one case situation.

There are a lot of unanswered questions and rumors swirling of how the TB case was contracted by the adult bovine. One theory is that it came from elk that were transplanted to the province in the 1990s as a range improvement project. Dr. Zaluski said that rumor cannot be confirmed at this time. From what he has learned, he mentioned that this herd of elk, “have had an extensive testing history,” and that “there is no reason to believe it came with those animals from that source heard. We are just waiting for additional information on that as well.”

Alberta rancher Brad Osadczuk was the owner of the cow that tested positive for TB.  According to him, all of his 1,200 cows and 51 bulls are under quarantine and will be disposed of.  Osadczuk said in an interview with Global News, “We haven’t gotten any results back on the index herd, just the one confirmed case that came out of the (United) States, and without any more information from the CFIA (Canadian Food Inspection Agency) or anybody, they’ve decided that one other neighbor’s herd will be destroyed – actually two other neighbors’ herds will be destroyed.”

In the same interview with Global News Osadczuk mentioned, “There is no compensation for a loss of business – I can’t live on love until my 1,200 cows are replaced and 50 bulls,” Osadczuk said. “I’m not sure what I’m going to do. I guess I’ll have to go out and get a job off the ranch.”

The Canadian Food Inspection Agency was not available for comment.

Montana State Veterinarian Marty Zaluski says Montana producers have no reason to fear TB at this time. This is primarily due to all the measures that are currently in place and have been protecting Montana producers for decades. He said the TB case is at the top of his list and will keep the Northern Ag Network notified on any new developments,

No matter where a disease occurs, it’s a tragic situation for these producers who are left with little to no options in trying to rebuild their livelihoods. 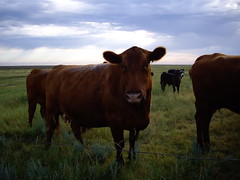 Montana Girl in the Running for the NCBA National Anthem Contest