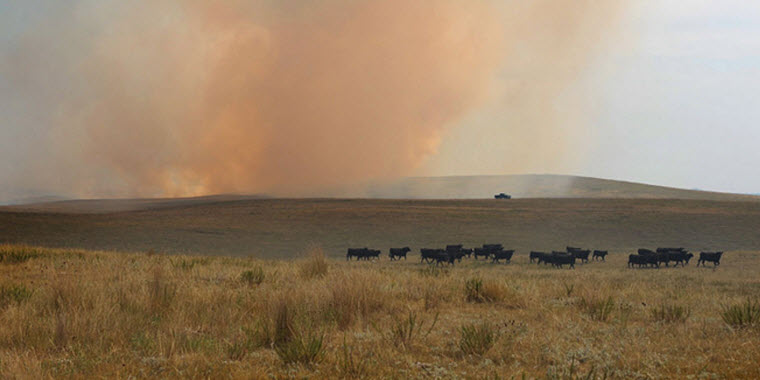 by Facts About Beef

Farmers and ranchers have been raising cattle on rangelands for more than 200 years. Rangelands provide ranchers with access to nutritional forage for livestock, preserving the integrity of the Western livestock raising heritage. Additionally, livestock grazing can be used as a tool to lower wildfire risk by reducing the amount, height and distribution of grasses and forage that fuels wildfire. When grazing and other fuel reduction practices are not allowed to take place, fuel such as dead and diseased trees in forested areas and tall, dry grass on rangelands accumulate, increasing fuel loads. When this happens the result is a catastrophic wildfire, a fire that burns so hot that the ground is left sterile.

Grazing on National Forests and Rangelands

Some Western states, such as California, Idaho and Washington, are experiencing devastating wildfires due to the combination of drought conditions and scorching hot temperatures as well as a lack of fuel reduction on public lands. The drought has left thousands of miles of rangeland parched, but peppered with forages that cattle can usually utilize for feed through grazing. When this land is left ungrazed, or unmanaged, the potential for a wildfire to start and spread quickly is exponentially increased.

The darker shaded area indicates where cattle are not grazed – this area has large amounts of fuel such as dried grass, underbrush and tree limbs, all of which can provide excess fuel for a wildfire. Photo courtesy: Idaho Cattle Association

The damages from a wildfire are shattering – a single lightning strike can wreak havoc on millions of acres and can drive homeowners, wildlife and livestock from their homes. Unfortunately, a large number of people have been forced to evacuate their homes due to the raging wildfires and, tragically, a few people have even lost their lives due to the somewhat uncontrollable nature of wildfires.

Farmers and ranchers also face the loss of cattle, barns, pasturelands and hay stacks to wildfires and many will unavoidably lose their homes. These damages can destroy the livelihood of families, many of which are farmers and ranchers who will spend years rebuilding their herds, replacing their losses, and putting the pieces back together.

When a wildfire spreads quickly and rapidly, fire-fighting resources are quickly depleted. Several wildfire-stricken states have had to call in military troops to assist firefighters with managing the rampant blazes. Annually, fighting and suppressing wildfires can cost federal, state and local agencies more than $1 billion. Every wildfire is difficult to control, but when a wildfire occurs on public lands that have been grazed, suppression is much easier due to the lack of excess fuel for the fire.

The U.S. Department of Agriculture explains, “Grazing management on rangelands today is a collaborative effort involving landowners, land managers, permit holders, universities, other agencies and the public.” Many cattle farmers and ranchers wish to work together with state and federal environental agencies to find solutions for wildfires and help prevent future wildfires from starting and spreading. By utilizing cattle grazing on public rangelands, farmers and ranchers can reduce the risk of wildfire, and minimize the damages they may cause.