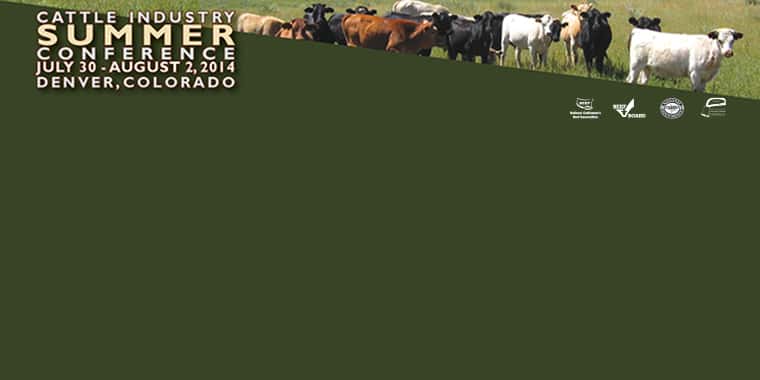 The 2014 Cattle Industry Summer Convention is underway.  Russell Nemetz is in Denver.

The following is a press release from the NCBA:

DENVER – More than 650 cattle producers are expected to gather at the Cattle Industry Summer Conference in Denver this week to help set direction for industry programs. The conference will run July 30 – Aug 2.

Keynote speaker at Thursday’s Opening General Session is Steffan Tubbs, well-known Colorado reporter on KOA radio and co-host of a community affairs program on Colorado Public Television. Tubbs, who has nearly 25 years of news experienced and has received the prestigious Edward R. Murrow award four times, will talk about his soon-to-be-released documentary film called Droughtland, which focuses on the devastating conditions of the recent drought in Southeastern Colorado and what the drought has meant to a huge portion of the West.

During General Session II on Friday, Kevin Good of CattleFax will outline the state of the cattle industry, the factors that have gotten the industry where it is and what his organization expects to see in the future. The session is sponsored by Bayer Animal Health.

“We’re seeing unprecedented conditions in our industry, and the producers who understand all of the factors for how we got here will be best positioned for success in the future,” according to Bob McCan, a beef producer from Victoria, Texas and NCBA president . “The working sessions at the Summer Conference will not only help provide that understanding, but will give participating producers a chance to play a leadership role in determining where we go from here.”

Joint Committees and Subcommittees will meet on Thursday and Friday to develop proposals for 2015 checkoff-funded research, education and promotion programs. Also on Friday NCBA policy committees will meet to determine priorities and discuss strategies for 2015. The NCBA Board will hold a session on Saturday, as will members of the Cattlemen’s Beef Board.

“Though the market has been good, our challenges remain sizeable,” says McCan. “It’s tremendous that we have so many leaders at the state and national levels who take time out of their schedules here to help chart our course.”

NORTHERN AG NETWORK NOTE:  Russell Nemetz is in Denver covering the convention.  Tune in to our radio and TV reports in the coming days for more from the event.  He will also be conducting interviews that'll air in an upcoming episode of “This Week in Agribusiness” on RFD.