Changes in Carcass Grade Over Time

The beef industry, similar to other industries, is constantly attempting to be more efficient and create more value in the product produced. Most cow-calf producers concern themselves with reproductive efficiencies and pounds of weaned calf per acre of land. These two things are important because a cow-calf producer cannot afford to have very many cows fail to wean a calf, and these producers are in the business of selling pounds with a limited quantity of land. Similarly, stocker producers work to reduce morbidity and mortality rates while also trying to pack on as many pounds as possible with their forage and feed resources. Producers from both of these sectors also attempt to add value by instituting management practices that reduce risk to downstream cattle buyers.

The feedlot perspective is very similar to stocker and backgrounding operations with focus on feed efficiency and cattle health, but there is also interest in carcass characteristics. Regardless of the marketing method (cash, formula, grid, etc.), cattle will be priced based on the actual or expected yield grade (YG 1-5) and quality grade (Prime, Choice, Select, etc.).

Cow-calf producers choose the genetics that go into the herd. The individual genetics essentially set an upper bound to how an animal can perform from a quality and yield grade standpoint. This upper bound can only be realized if the animal is placed in an environment to promote its genetic potential. Despite what happens at the cow-calf and stocker producer level, feedlot managers will employ management practices in the feedlot to accentuate carcass characteristics. 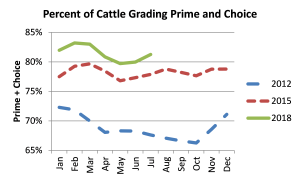 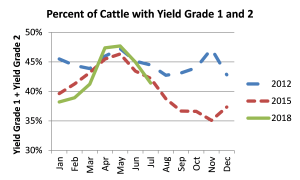 Why does this matter? Cattle that grade Prime or CAB receive premiums as do cattle that are yield grade 1 or 2. As the percentage of cattle grading prime and CAB increase, it would be natural to see those premiums decline unless the demand for those products increases. The opposite is true for yield grade. The point is that producers should be aware of what is changing in the industry and how it might influence their bottom line.