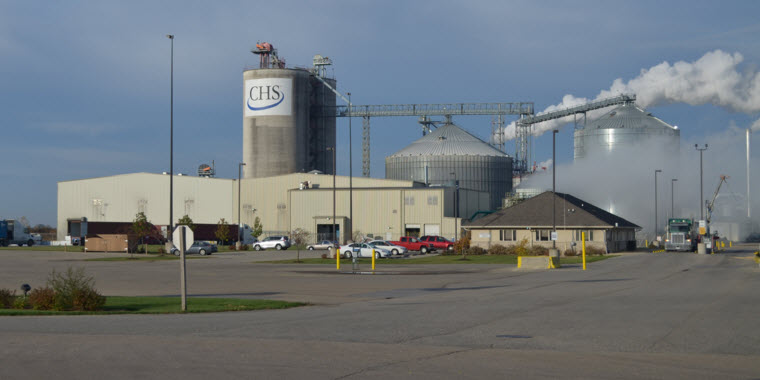 OMAHA (DTN) — Minneapolis-based co-op CHS Inc., which has returned more than $2.5 billion to its farmer and cooperative members in patronage dividends since 2010, wants to change who and what qualify as members.

Dave Bielenberg, CHS's chairman and a farmer in the Willamette Valley, said the changes reflect the changing nature of its local cooperative members' businesses and are essential to avoid a costly and awkward compliance audit. (Photo courtesy of CHS)
That's generating confusion and concern about who could be eligible to share in company profits and who will guide CHS business policies in the future.

Members of CHS Inc., the nation's largest farmer cooperative, will vote on changes to the organization's bylaws on Dec. 4 at the company's annual meeting. Members will vote for or against the bylaw changes as a whole without revisions.

CHS's board of directors argues the new definition reflects the changing nature of cooperative members' businesses.

But some organizations, like the North Dakota Farmers Union, think that bylaw change opens the door to increased influence over CHS's governance by non-producer factions.

NDFU President Mark Watne told DTN he doesn't think such loss of farmer control is imminent, “but whenever you allow a change in governance, you can directly change the direction of the company.”

Most of the revisions to CHS's bylaws and articles of incorporation are simple housecleaning. One change, for example, removes outdated references to the former co-op Cenex, which merged with Harvest States in 1998 to become CHS. Another change removes a membership class that no longer exists.

Along with the local cooperative member definition change, the two other most controversial portions of proposed bylaw changes remove the sole reference to the Capper Volstead Act and give the board of directors the power to determine whether a nonmember is eligible for patronage dividends.

Willamette Valley, Oregon, farmer and CHS Chairman Dave Bielenberg told DTN in an interview most of the confusion around the bylaws comes down to a misunderstanding of the CHS membership classes.

There are two types of memberships: individual (or direct) members and cooperative association members.

Each of CHS's 75,000 individual members are farmers who do a set amount of business with a CHS retail operation each year.

CHS also has about 1,100 cooperative members, which are local co-ops that do a certain amount of business with CHS every year, and that have farmer-members of their own. Bielenberg said there are at least 500,000 farmers who are members of CHS through their local co-op.

Bielenberg said some local co-ops, for example, allow a local trucking firm that uses many of the co-op's products and services, just as a farmer member does, to receive a patronage or participate in co-op governance. Other local co-ops may have consumer members who purchase propane or fuel, but don't actively farm, who serve on the co-op board or vote.

While CHS leadership has heard concerns about such conflicts for several years, Bielenberg said that wasn't confirmed until last year. “It's probably wider spread than we had thought,” he said. “We need to make sure that we do business the way our bylaws say we do.”

If the change to the bylaws doesn't pass, Bielenberg said CHS will have to ask its members to prove they're in compliance with the bylaws, which would likely require an audit.

“That's never easy to do, nor comfortable,” he said. “Plus it costs money. We don't think we need to be spending money to do that kind of stuff.”

Co-ops that aren't in compliance would lose their membership, and potentially, their patronage dividends. “We don't want to go there, that's why we're proposing these changes.”

NDFU President Watne has reviewed the bylaw changes closely with the North Dakota Cooperative Managers' Association and understands co-ops in North Dakota have kept the producers-only membership requirements in their bylaws. He said it was producers' equity that helped build CHS into the Fortune 100 Company it is today.

“So, the producers say, why should we give away our governance rights to people that have not been in this system, established it and did the work for it that we did?” he said.

Watne is concerned that changing the membership definition would allow government entities, non-farmer organizations and consumer cooperatives to earn patronage and have voting rights.

Some members have expressed concern that consumers at CHS retail stations, if they purchased enough during the year, could become individual CHS members under the new rules, increasing consumers' voting strength. Bielenberg said the definition change only applies to local cooperative memberships. Individual members must still be agricultural producers.

The CHS board of directors will require any new co-ops applying for CHS membership to have boards composed predominantly of agriculture producers.

As part of widening the definition of cooperative association memberships, CHS had to drop its reference to the Capper Volstead Act in its bylaws.

“That was the enabling legislation that allowed for farmers and ranchers to jointly market and jointly buy inputs without being in violation of antitrust laws,” Watne said. He doesn't know if there's business risk in removing the reference, “but once again it seems like we're backing away from what created the system, and that has almost every cooperative in this state upset right now.”

Bielenberg said removing the reference was essential if CHS was going to change the definition of cooperative association memberships. It's Capper Volstead that requires all members of the cooperative to be producers.

The Capper Volstead Act also protects cooperatives that pool products for sale. Most of CHS's business is on the supply side, and while it's a large player in the grain markets, “all of our activity in the grain market is marked-to-market. We don't do any pooling activities. We have never needed protection from Capper Volstead. We don't think we'll need that protection.

“There's also been some innuendo that by removing the Capper Volstead reference in our bylaws that we no longer support Capper Volstead,” Bielenberg said. “That's completely not true either. We think Capper Volstead is very important for those cooperatives that need that protection. We support it to the utmost.”

Bielenberg used an example of a farmer member who retires, rents his land and no longer directly operates the farm. Under current rules, any patronage payments to that farmer would require a bylaw change. Proposed rules allow the board to have more discretion on such dividends.

Bielenberg said the board has been accused of having an agenda and having a list of people and entities it wanted to pay nonmember patronage to. He said that's not true. In fact, the issue has been so controversial with the board that earlier this year it was scratched from a committee's agenda.

Bielenberg said one area not being changed is the requirement that members of the board of directors are agriculture producers. He also said the rumor CHS wants to go public is untrue.

“CHS is going to continue to do business in a cooperative manner, and we're trying to reflect the changes that are going on with our member co-ops,” he said. “We want to give the board what we think are more up-to-date and usable abilities to run the business around paying nonmember patronage. It really has to do with updating our bylaws to get with current practices to make it more efficient.”

If would like to read more about CHS's proposed changes to its article and bylaws, here's a link to their website: http://bit.ly/…

Manure From Millions of Hogs to Fuel Biogas Project