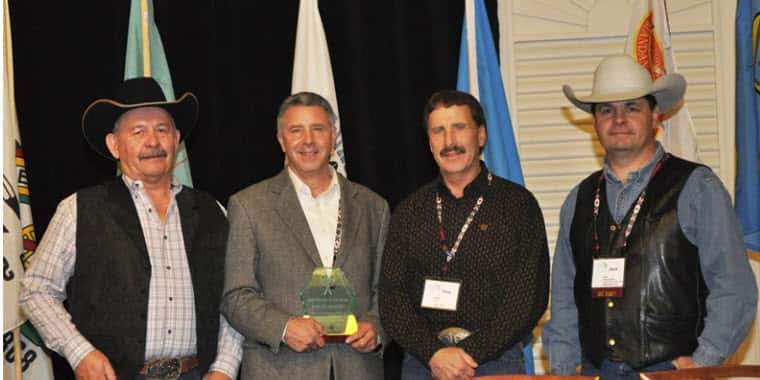 Clairmont Recognized as IAC Producer of the Year

The Intertribal Agriculture Council (IAC), a national organization, was founded in 1987 to pursue and promote the conservation, development and use of their agricultural resources for the betterment of Indian people.  Land-based agricultural resources are vital to the economic and social welfare of many Native American and Alaskan Tribes.

[EasyDNNGallery|774|Width|350|Height|350|position|left|resizecrop|False|lightbox|False|title|False|description|True|redirection|False|LinkText||]“This acknowledgement is a great honor and something that I never really expected. Being named Producer of the Year for 2014 by the IAC is more about the efforts taken by tribes, the department and extension offices to advance agriculture with Native Americans,” said Clairmont. “Agriculture is a way to connect with the land, like our ancestors, and provide for tribes as sovereign nations. The importance of food security was instilled in us by our elders, and by expanding food and agriculture development the next generation can become more sovereign.”

Clairmont, an enrolled member of the Confederated Salish & Kootenai tribes, has been deputy director of the Montana Department of Agriculture since 2004, prior to which he was a reservation extension agent for Montana State University. Throughout his tenure as deputy director and an extension agent, he has maintained a farming and ranching operation on the Flathead Indian Reservation near Flathead Lake. As the department’s deputy director, he continues to support and advocate for Indian agriculture and the IAC.

“The department is lucky to have Joel provide firsthand knowledge and experience both as a producer and enrolled tribal member. He brings a perspective and a wealth of familiarity that not many can replicate, and is committed to growing and expanding agriculture for Native Americans and Montana,” said director Ron de Yong.

At the membership meeting Joel was presented with a glass plaque inscribed with, “Producer of the Year, Joel Clairmont, Your continuing effort to improve Indian agriculture makes you this year’s choice.”  His nomination read: “Joel is a member of the Confederated Salish and Kootenai Tribes and has been a producer for many years here on the Flathead Indian Reservation. He has always been involved with agriculture both professionally and personally.” Individuals in the Rocky Mountain Region strongly stressed their support for Clairmont receiving this year’s award.

As a reservation extension agent he was committed to providing educational opportunities for tribal agricultural producers and youth.  Joel also served on the Confederated Salish and Kootenai Tribal Council and IAC prior to assuming his duties with the department. In his current position, Clairmont often meets with tribes and tribal producers to discuss their agricultural needs and pursues initiatives to advance their interests in addition to his other duties.