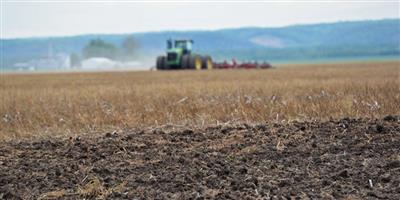 For most of us, wheat is wheat. However, there is a distinct difference between spring and winter wheat, even though the vegetative characteristics of these two wheat types are very similar. Winter wheat can withstand freezing temperatures for extended periods of time during the early vegetative stage, and it requires exposure to freezing or near freezing temperature to trigger reproductive stage. In other words, if winter wheat does not go through a period of cold temperatures, then it will not produce seed. Two things needed for winter wheat to perform optimally and produce good yields are- cold acclimation and vernalization.

New emerged winter wheat seedlings in early fall are no different than spring wheat seedlings. In order to survive through cold winters with subfreezing temperatures, winter wheat has to be exposed to a series of cooler temperatures early in the growth stage, which is called ‘cold acclimation’ or simply ‘hardening’. The acclimation is possible due to gradual decreases in daily temperatures in the fall after the wheat has emerged. Winter wheat plants adapt to rapidly decreasing temperatures in late fall or winter by lowering moisture content of the ‘crown’ (the growing point at the base of the shoot), decreasing the accumulation of carbohydrates, and slowing down the overall growth process. This greatly helps with frost resistance and other winter conditions that a winter wheat plant has to go through during its life cycle. Cold acclimation generally starts when the temperature starts to fall below 50F.

Once cold acclimation is achieved, winter wheat requires an extended period of below 40°F temperatures to be able to trigger its reproductive growth the following spring. The amount of time and range of temperatures required varies among varieties. Winter wheat varieties that are adapted to northern climates are usually more tolerant to extended subfreezing temperatures than those adapted to southern environments. The most winter hardy varieties can withstand crown temperatures as low as -15°F.

Better winter survival is achieved when winter wheat is seeded into crop stubble (or no-till) and plants in the fall are at the 3-4 tiller stage before going into winter. Crop stubble helps catch snow throughout the winter and form an insulating blanket, increasing significantly the chances of winter survival. Snow also plays a major role in providing the moisture needed the following spring.