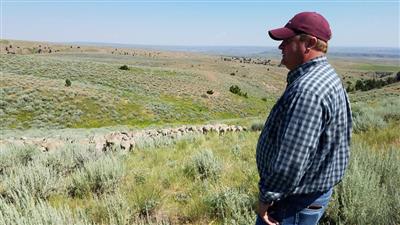 Noxious weeds are devastating to a healthy landscape. That’s why a ranch in South Central Montana is using both art and sheep to promote good land stewardship.

“Primarily we’re here to help control this leafy spurge population” said Ben Lehfeld, a rancher from Lavina, MT. “This noxious weed that’s around quite a bit of the state of Montana.”

Noxious weeds are a real threat to Montana’s landscape including native rangeland like that found on the Tippet Rise Ranch near Fishtail, Montana. That’s why each year, the Lehfeldt family bring their sheep to aid in the control of noxious weeds like leafy spurge.

“In some of these areas where it’s really dense, we really need to attack it from several different angles” said Lehfeldt. “Sheep and biological control are one of those major angles that we focus on. We use our Peruvian H2A sheep herders to really guide are sheep bands this time of year into these yellow patches and take the flowers off to limit the seed production, the rhizomes and really give the grass chance to not be completely out competed in these areas.”

He says unlike cattle, the sheep will eat leafy spurge

Lehfeldt said “The cattle will not come in these leafy spurge areas which allows it to out compete the grasses which ultimately allows for a lower amount of AUM’s throughout these areas. So, it’s important to have some support of plan and being proactive like this Tippet Rise Ranch and using biological sheep control as well as some bugs that can help with leafy spurge.”

Herbicides can also be used for control but using biological methods like sheep really work well for the Tippet Rise Ranch.

“Herbicides are an option and can be used especially when you have a starting leafy spurge or population or notice it in your backyard you can eliminate a patch because it hasn’t because it hasn’t gotten those tremendous amount of tape roots and Rhizomes” said Lehfeldt. “When you come to a spot like this that is somewhat out of control with leafy spurge, you’re into more of a control environment. In our case, we’re using this leafy spurge as a food source to produce food and fiber.”

For traditional Montana ranching families like the Lehfeldt’s, they appreciate the relationship they have with the Tippet Rise Ranch and their willingness to keep livestock grazing part of their unique ranch operation.

Lehfedlt said “So, it’s great to have these people that aren’t necessarily native Montanans but have come in with an idea that they want to continue the native grazing, add their special touches with sculptures and symphonies and different tourist ideas but keep kind of the Montana way of life with the grazing of the sheep and cattle which add a lot of value their property in our eyes and I think in their eyes too.”