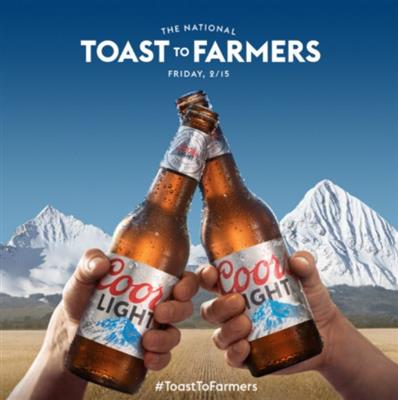 Coors Light to Host a Toast to Farmers

This Friday, Coors Light is asking all beer drinkers across the country to raise a glass to toast the nation’s farmers.

The celebration – hashtagged #ToastToFarmers – is a tribute to the men and women who harvest the ingredients that go into Coors Light. It’s also the latest riposte to Anheuser-Busch for spending millions on national ads during the big game attacking Coors Light and Miller Lite for using corn syrup in the brewing process.

“ABI didn’t just attack our flagship brands, they attacked hardworking American farmers who grow our great ingredients,” Ryan Reis, vice president-Coors family of brands, said in a note Sunday night to MillerCoors employees and distributors. “We’re standing up for our beers, our ingredients and the farmers who grow them.”

The call for the nationwide cheers was kicked off Sunday afternoon on Instagram and Twitter in a post by the Grammy-nominated country duo Brothers Osborne. The post showed the brothers – lead vocalist T.J. and guitarist John – clinking cans of Coors Light. It read: “Pregame ritual with @CoorsLight raising a toast to the farmers who bring the brews and grub to the table. Our beautiful country is built on y’all. #ToastToFarmers #partner.”

“Our employees, including members of the Senior Leadership Team, and distributors will visit on-premise accounts, buy a round of Coors Light in states where possible and raise a glass to the hardworking men and women who grow our ingredients,” Reis said in a note to distributors that went out Monday.

Bars and taverns, especially in parts of the country that have a major agriculture presence, represent a new front in the back-and-forth between Anheuser-Busch and MillerCoors that was precipitated by the Bud Light ads.

Last Tuesday Miller Lite took out a response ad in the New York Times. That same day Pete Coors visited a meeting in Denver of the National Corn Growers Association.

Miller Lite has created new point of sale assets that reinforce how it has more taste but fewer carbs and calories than Bud Light while Coors Light has created materials celebrating farmers. MillerCoors last week told distributors it would support the creation of additional retail selling materials.

Since the ads first aired, Anheuser-Busch alternately has sought to walk them back in face of criticism from corn growers and claim that the spots were about transparency. When various outlets (including this one) noted that some Anheuser-Busch beers were brewed with corn syrup, Anheuser-Busch claimed it used that ingredient for value brands. However, as noted on an AB InBev website, some above-premium brands – including Bon & Viv and Stella Artois Cidre – are made with corn syrup.

While it remains to be seen how much national attention the rekindled beer wars will continue to receive, it’s clear that in this hyper-competitive industry the attack ads are going to remain bulletin board material.

A statement from the company may have said it best, “We’re proud to stand up for our beers, our ingredients and the farmers who grow them.”