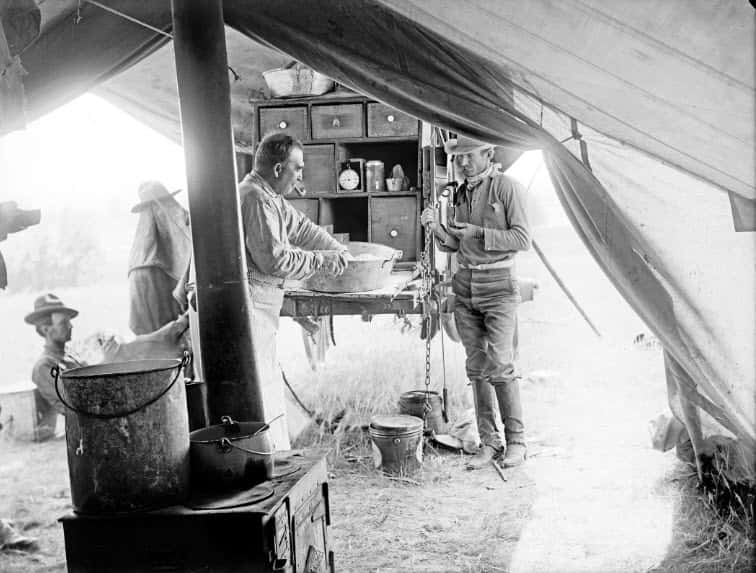 Cowboying Up Meant Making Bread Too

(Photo of cook and foreman in the chuck wagon tent)

Butch Monroe puffed on his pipe as he made bread for the round up crew on the LU Bar ranch in 1904. Ben Fleming, the foreman of the LU, looks on as the work of feeding the cowboys gets done.

From the Montana History Revealed blog:

Used during cattle drives as well as roundups, the camp cook and his provisioned chuck wagon were responsible for sustaining crews of hardworking cowboys for days, if not weeks. Camp cooks were only able to accomplish this task if they were adept at planning and packing the right provisions.

The 1892 journal left by XIT trail boss Ealey Moore recorded the supplies used for a crew of 10 men during the thirteen weeks it took to drive 2500 cattle from Channing, Texas to the confluence of the Yellowstone River and Cedar Creek north of Miles City. The inventory included both traditional as well as recent additions to the cowboy diet. The cook, Sam Williamson, ground and brewed almost 2 pounds of coffee beans a day, going through 3 coffee mills. Each day he cooked 10 pounds of bacon.

During the 13 week drive, the crew consumed
40 pounds of rice
160 pounds of beans
9 gallons of sorghum
almost 300 pounds of fruit, including dried currants and prunes as well as dried, fresh, and canned apples and peaches
1750 pounds of white flour
405 pounds of white sugar

The only vegetables purchased during the trip were kegs of pickles and 720 pounds of potatoes.

What Science Illiteracy and Instant Information Means for Agriculture