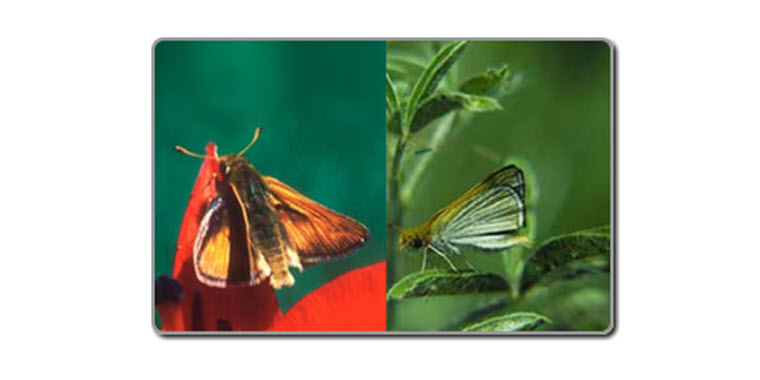 Critical Habitat in the Dakotas Designated for Two Prairie Butterflies

The Service designated about 19,900 acres of critical habitat in 38 units in Minnesota, North Dakota and South Dakota for the threatened Dakota skipper, and about 25,900 acres in 56 units in Iowa, Michigan, Minnesota, North Dakota, South Dakota and Wisconsin for the endangered Poweshiek skipperling. Of the total 33,742 acres of critical habitat, about 12,050 acres is common to both species.

Critical habitat is defined in the Endangered Species Act as an area that contains habitat features that are essential for the survival and recovery of a listed species, which may require special management considerations or protections. The Act requires the Service to consider which areas are needed for a species’ recovery.  Regulation of critical habitat is limited to the requirement that federal agencies consult with the Service on any actions that may affect critical habitat. The Service can then recommend ways to minimize adverse effects to the habitat.

A critical habitat designation imposes no requirements on state or private actions on non-federal lands where no federal funding, permits or approvals are required. Designation of critical habitat does not affect land ownership and does not allow the government to take or manage private property; nor does it establish a refuge, wilderness, reserve, preserve or other conservation area.  It does not allow government or public access to private lands.

The Service’s final critical habitat designation for the two butterflies is 8,175 acres fewer than proposed.  Some areas originally proposed were excluded because conservation agreements are in place to conserve the species. Some areas were modified based on biological information; areas with unsuitable habitat were removed, and areas that were found to have suitable habitat were added. In total, these changes amounted to reductions of 7,879 acres for the Dakota skipper and 296 acres for the Poweshiek skipperling.

“That these butterflies have survived at all is because of the good stewardship of some of the region’s landowners,” said Tom Melius, the Service’s Midwest Regional Director. “We will continue to work with these and other landowners to ensure the conservation of remnant prairie habitat and these prairie butterflies.”

Found in Minnesota, North Dakota, South Dakota and Canada, the Dakota skipper has experienced a dramatic decline in numbers and no longer occurs on half the sites where previously found.

The Poweshiek skipperling has also experienced a recent, dramatic decline in numbers. Once found in eight states and Canada, it now occurs only in a few native prairie remnants in Wisconsin and Michigan, and in Manitoba, Canada. Surveys indicate that Poweshiek skipperlings are gone from about 96 percent of the sites where they were known to occur.

Prairie remnants that are home to these butterflies are some of the few natural areas present across the predominately agricultural landscape of the Dakotas and western Minnesota. These prairie grasslands support a diverse array of native wildlife including grassland birds such as the sharp-tailed grouse, blue-winged teal, mallards and other waterfowl, prairie plants such as big and little bluestem and the pasque flower, and many species of pollinators, such as the monarch butterfly. These grasslands also protect watersheds by increasing water infiltration and water yield, provide improved water quality due to the lack of fertilizer, pesticide and herbicide use. Recent studies have found diverse native prairie plants sequester large amounts of carbon.

For more information about the Dakota skipper, the Poweshiek skipperling, and the final critical habitat designation, go to www.fws.gov/midwest/endangered

Photo of a Dakota skipper (left) and a Poweshiek skipperling (right). Credit: USFWS.