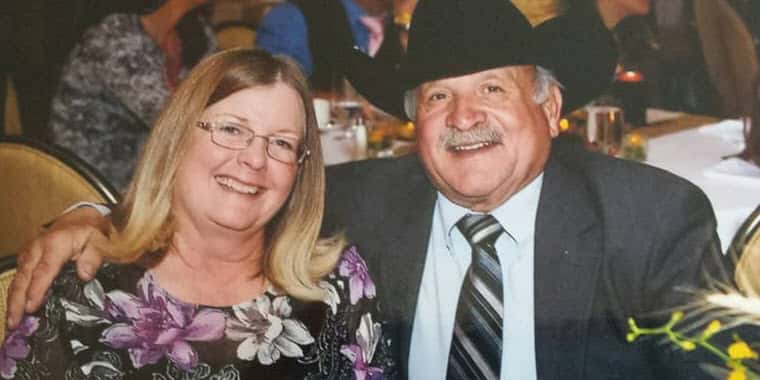 Kelsey grew up on a small irrigated farm in Bridger, MT.   Like many Montana kids, he was involved with 4-H and had projects ranging from leather craft, range projects, livestock and even tried knitting once.  He also participated in FFA and served as a State Officer.  Kelsey attended Montana State University and graduated in with a degree in Agriculture Education.  He taught high school Vo-Ag for several years before returning back to production agriculture.  Kelsey and his wife currently run a farm/ranch where they raise dryland grains, hay and cattle.

Kelsey was very proud that he and his wife Karen had raised their three daughters on a rural farm and he stressed how great it was to be able to have his children involved in agriculture.  “That has been so important to both my wife and I.  Raising a family in an agricultural setting is just an excellent setting where you can develop a work ethic in your kids,” he commented.  All three daughters have since graduated from college, but Kelsey did note that two daughters had graduated from the University of Wyoming.  “I'm an MSU grad, you know, so I just leave that at that” Kelsey said laughing.

[EasyDNNGallery|3438|Width|400|Height|400|position|right|resizecrop|False|lightbox|False|title|False|description|True|redirection|False|LinkText||]Kelsey actively supports agriculture education for Montana’s youth in many ways.  He served for over 20 years as a 4-H leader with his wife, is a past president of Montana Range Days, and was instrumental in helping to recruit the John Deere Expo back to MSU.

“My involvement in youth organizations and promoting agriculture when and however I can, is very important to me.  It’s about trying to make the atmosphere better for the future of agriculture in this state so people look at it as a viable job occupation.” said Kelsey.

[EasyDNNGallery|3441|Width|400|Height|400|position|left|resizecrop|False|lightbox|False|title|False|description|True|redirection|False|LinkText||]In 2014, he received the National Association of Agricultural Educators Outstanding Cooperation Award in recognition to his long and dedicated service to supporting youth education in agriculture.

In speaking with Kelsey, it’s easy to see how passionate he is about the agriculture industry in Montana.  “For me, it’s about promoting agriculture to students, to business, and basically a lot of people you come in contact with.  You want to make sure they understand the importance of agriculture to Montana and to the United States.  It’s our number one industry in the state and very critical to the economy of our state,” Kelsey stated.

Kelsey has also had opportunities to represent Montana agriculture on an international level as well.  In 2003, he was asked by Montana Senator Max Baucus and Representative Denny Rehberg to serve as a livestock industry representative on a five-person agricultural trade mission to Cuba.   As a member of this trade mission, he helped secure a $10 million trade deal for Montana agriculture products to Cuba.

[EasyDNNGallery|3437|Width|400|Height|400|position|left|resizecrop|False|lightbox|False|title|False|description|True|redirection|False|LinkText||]Kelsey received the Ag Excellence award during the annual Ag Appreciation Banquet, hosted by the Billings Chamber Ag Committee, on Friday, January 15.  The Billings Chamber hosts the banquet each year as a way to thank the area farmers and ranchers for all they do, the agri-businesses, and communities that support them.  Kelsey, a member of the Billings Chamber Ag Committee, added “I’m really thankful that we have the support of the [Billings] business community for agriculture and I really appreciate the Chamber’s involvement with the Ag Committee and promoting the number one industry.”

Bruce MacIntyre, Director of the Billings Chamber, spoke highly of Kelsey’s strong commitment to the ag industry.  “It’s interesting to watch Dave as he touches so many different aspects of agriculture.  He’s involved in every aspect of ag and is a wealth of information.”

Kelsey finished his award acceptance speech on Friday with the famous “So God Made a Farmer” speech given by the radio broadcaster Paul Harvey during the 1978 Future Farmers of America convention.  It was a fitting tribute for this year’s Ag Appreciation Banquet and for Dave Kelsey.

Harry W. Olson: A Great Cowboy Who Will Be Missed