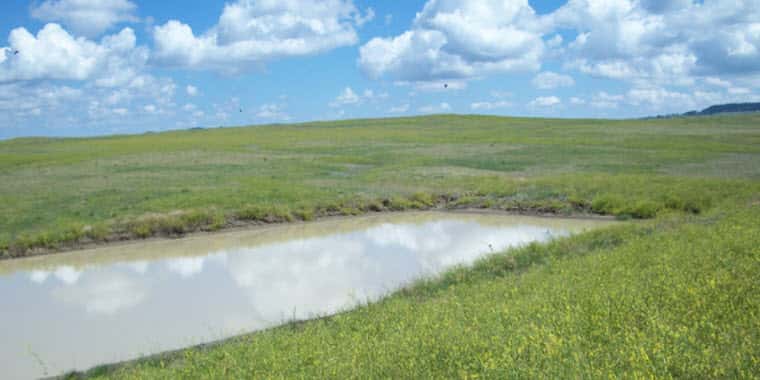 A federal court in South Dakota sided with USDA on July 1 in a lawsuit brought by farmer Arlen Foster, ruling the department was not required to grant a review of a previous wetland determination on his farm.

Foster presented new evidence in 2020 showing a USDA-deemed wetland on an 0.8-acre tract of land on his South Dakota farm was artificial in nature. Foster requested the Natural Resources Conservation Service (NRCS) review the new information and complete a new assessment of the 2011 determination. That request was denied.

A federal judge in the U.S. District Court for the District of South Dakota rejected Foster’s motion for summary judgment because Foster did not present to NRCS evidence of a “natural” change to the physical geography of the land.

Summary judgment is entered by a court for one party and against another without a full trial. Summary judgments may be issued on the merits of an entire case or on discrete issues.

When contacted by DTN, Foster said, “I will be talking with my lawyer to see what to do next.”

Foster has been battling USDA’s wetland determination since 2008. USDA declared a puddle in one of his fields to be a wetland in 2011.

Foster presented to the NRCS new evidence in 2020 that showed a tree belt installed on his farm by his father in 1936 causes massive snow piles in the field. The yearly spring melt has created a perpetual puddle.

Foster filed requests for review on his Miner County, South Dakota, farm in 2017 and 2020.

“Foster has not established that he suffered any due process violation because there is no law or independent source of authority giving Foster a right to certification review upon request,” Lange said in an order.

“Here, defendants’ denial of Foster’s requests for review in 2017 and 2020 were final agency actions. The refusals, after administrative appeals and judicial appeals had been exhausted, barred any further review of the 2011 wetland certification and ensured that the enforcement provisions of the Swampbuster Act remain in place for the 0.8-acre site at issue.”

Lange further writes, “Foster does not allege or point to any evidence in the record suggesting that NRCS (Natural Resources Conservation Service) believed the 2011 wetland certification was erroneous when he brought his requests for review in 2017 and 2020.”

In response to his 2017 request for review, the NRCS asked Foster to “supply additional information” not previously considered by the agency. Although the statute does not require a producer to submit new information with a review request, Foster complied.

As it stands, if Foster decided to farm the land in question, he would be ineligible for farm programs.

Foster alleged in the lawsuit the NRCS unlawfully refused to reconsider a wetlands determination when he presented new evidence in 2020 to prove the ground did not contain a wetland.

According to Swampbuster regulations, a final wetland certification remains valid and in effect as long as the land is devoted to agricultural use or until the person affected by the certification requests a review.

The Supreme Court previously ruled the government cannot force people to waive constitutional rights as a condition of receiving federal benefits, including from farm programs.

Foster said in a brief to the South Dakota court that based on USDA’s new standard, a producer would “never be able to get a review of a certification, even with advancements in technology or better understanding of wetlands science.”

According to Foster’s lawsuit, a mud puddle on his ground does not dry out at the same pace as surrounding fields because it receives additional snow melt from a tree belt. In about half of those years, the mud puddle dries out soon enough that its soil also is dry enough to support the use of farm equipment.

Foster’s technical report to USDA in 2020 demonstrates the mud puddle was created “incidentally to the development of the tree belt and is, therefore, an ‘artificial wetland,'” Foster’s lawsuit said.

That information was not available to Foster or USDA ahead of the 2011 wetland certification.

In July 2008, Foster asked the NRCS to reconsider an earlier wetland delineation it performed, according to a petition he filed with the Supreme Court.

Foster continued to challenge NRCS through a series of court cases, eventually losing in an appeal to the U.S. Court of Appeals for the Eighth Circuit in St. Louis in April 2016.