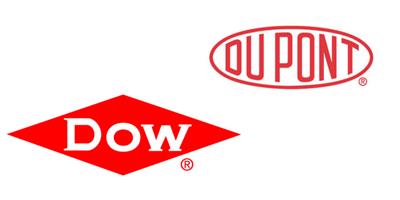 Dow Chemical Co. and DuPont Co. are in advanced talks to merge, in what would be a combination of two of America's oldest companies that together are worth nearly $120 billion.

The chemical giants, which each have a market capitalization of about $60 billion, could announce a merger in coming days, people familiar with the matter said. It would be followed by a three-way breakup of the combined company, they said, a common approach to mergers and acquisitions of late.

Dow's Chief Executive Andrew Liveris is expected to be executive chairman of the new company, with DuPont CEO Edward Breen keeping that title.

Terms of the deal couldn't be learned, but some of the people said it would be billed as a merger of equals, meaning there wouldn't be a big premium for either set of shareholders. A deal hasn't yet been inked and the talks could fall apart, the people cautioned.

Even if the two sides manage to agree, there is no guarantee antitrust regulators would bless the union or that the breakup plan would address any such concerns. The merger would combine two top suppliers of industrial and agricultural chemicals and crop seeds.

Should it come to fruition, a combination of the companies, each more than a century old, would be one of the biggest in a year marked by big deals. So far, companies have struck some $4.35 trillion of takeovers in 2015, eclipsing 2007 as the top year on record for deals, according to Dealogic.

Before any breakup, the deal would create a giant with more than $90 billion in combined sales and strong positions in everything from plastics to industrial chemicals and agriculture.

Under pressure from shareholders to slim down and focus on faster-growing units, both companies have been restructuring their businesses by shedding some of the products that made them famous.

The deal under discussion would ultimately accelerate that process, with the creation of separate businesses housing the companies' agricultural, materials and material sciences and specialty-products businesses, some of the people said.

A deal, should one be reached, would come as talks of consolidation in the agricultural-sciences industry have heated up, with companies scrambling to adjust to pressure on lower prices for their commodities.