While the Russia-Ukraine conflict remains the biggest driver of wheat futures prices, U.S. winter wheat in drought conditions across the Plains is becoming an increasingly bullish factor for prices. This latest concern is likely to overshadow USDA’s recent estimate for a slight increase in winter wheat acres with potentially serious implications for supplies heading into summer.

On Tuesday,  Chicago Board of Trade (CBOT)  soft red winter (SRW) wheat futures reached their highest level since March 23, while Kansas City Board of Trade (KCBT) were up nearly $0.21 Tuesday and up 50% since the start of the year. The Washington Post this week reported that winter wheat conditions are the poorest in more than two decades for this early in the growing season.

Dry weather is not unique in the Plains states, but some years are worse than others. The current USDA drought monitor data indicates that most hard red winter (HRW) wheat is in drought. USDA reported just 32% of winter wheat is in good or excellent condition. That is a two-point improvement compared to last week but far from the 53% good or excellent rating at this time last year. The last time crop conditions were at this level so early was in 1996. According to USDA, total wheat yields that year were 2.41 MT, 24% behind 2021/22, a year that also saw substantial wheat in drought. 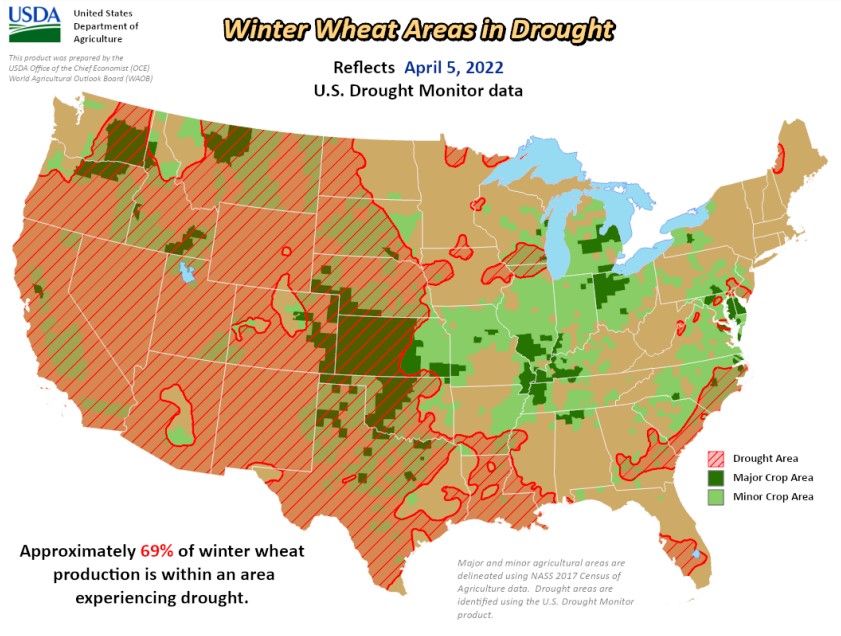 Too Much Wheat in Drought. Of the 69% of winter wheat production USDA shows growing under drought conditions, almost all the 2022/23 HRW wheat crop is struggling in dry top- and subsoil.

Growing conditions for the 2022/23 HRW crop have been tough from the start. Last fall, plantings were sown in very dry soil, and precipitation was light. Snowfall was limited, and now above average temperatures with limited rainfall have only added to the stress. Weather forecasts point to more dry weather ahead.

Kansas, the leading HRW producing state, is dry. The U.S. Drought Monitor reports severe drought in the western half of the state. However, Kansas Wheat published a recent story about varied HRW conditions, perhaps unsurprising for a state that is 400 miles (644 kilometers) long. Nevertheless, all the farmers agreed that rain is needed.

To the west of Kansas, conditions are also dry and windy in Colorado. High winds rob the soil of moisture, exacerbating a lack of rainfall. Topsoil moisture conditions were rated 16% very short, while subsoil moisture was rated 17% very short across the region. Both were unchanged from the week before. Nebraska’s wheat conditions are above the national average, with 32% rated good or excellent and 46% rated fair. Soil moisture is short for the state, but decent moisture in the fall has provided some relief.

In South Dakota, where winter wheat planting is 4% higher than last year, conditions are rated 58% fair and 22% good to excellent. Given the overall winter wheat conditions, the crop in South Dakota looks strong.  In Montana, wheat rated fair is 62%, while 15% is good to excellent. Conditions have improved in some areas after a significant snowstorm the past week. However, many areas were missed by the storm and like so much of the winter wheat growing area, soil moisture is poor. Most of the state is either in extreme drought or severe drought.

In Oklahoma, the second largest winter wheat producing state after Kansas, conditions improved week-over-week, with 29% of HRW rated good or excellent, up 6 points from a week ago. Texas has the most wheat in drought, with 56% of the statewide crop rated very poor. Long-term drought conditions have impacted the growth of this year’s crop. One Texas Farm Bureau member noted that some farm areas hadn’t seen measurable rainfall at all this calendar year.

April is critical for HRW development, and timely rain is needed. And while conditions are not ideal right now, farmers as ever remain optimistic.