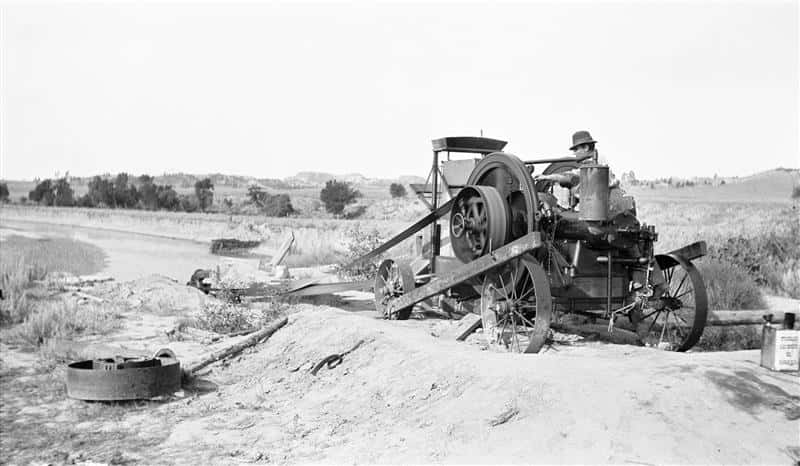 Early Days of Getting Water to Where You Need It

(Photo of man on irrigation pump)

Montanans are still arguing about water rights, but this farmer had his hands full trying to get it where he needed it in about 1910. Irrigation pumps have come a long way since then.

According to the 1911 Encyclopedia Britannica on Montana irrigation:

Agriculture.—In 1906 the farm area was almost equally divided between “dry” farming and farming under irrigation, three-fourths of the wheat produced was grown without irrigation, and the dry farming was very successful with the comparatively new and valuable crops of durum, or macaroni wheat, and Russian barley, which is used in straw for winter feed to sheep and neat cattle.

But even where dry farming was successful, the increase of crops made possible by cheap irrigation seemed to be inducing farmers to abandon it. Among the larger privately irrigated tracts are: 16,000 to 18,000 acres in Yellowstone county, fed by a canal built by the Billings Land & Irrigation Company; about 35,000 acres of orchard land in the Bitter Root Valley, in Ravalli county, irrigated by canals from Lake Como, a natural reservoir; and 100,000 acres in Missoula county, to be watered from a 28 ft. dam across the Clark Fork (or Missoula River) at Bonner.
Private irrigation by pumping was first successfully introduced about 1901, and in 1906 a state report estimated that 125 pumping irrigation plants were in use in the state. Boring for underground water supply to be used in irrigation was tried on a small scale.
The great Federal projects were not begun until after 1900. Among them are: the Huntley project in Yellowstone county, begun in 1904 and practically completed in 1908, covering land formerly in the Crow Indian reservation, the irrigable area being 28,921 acres; the Lower Milk river project (and the subsidiary St Mary project), in Chouteau, Valley and Teton counties, by which the water of St Mary river[1] is stored and diverted to the headquarters of the Milk river to irrigate an area of 300,000 acres; the Sun river project (Teton, Lewis and Clark, Chouteau and Cascade counties), by which, as the ordinary flow of that river is already utilized for irrigation, the flood waters are stored and carried to the higher bench lands of the district; in Montana (Dawson county) and North Dakota (McKenzie county), the Lower Yellowstone project; and the Blackfeet project, to irrigate the Blackfeet reservation in Teton county.