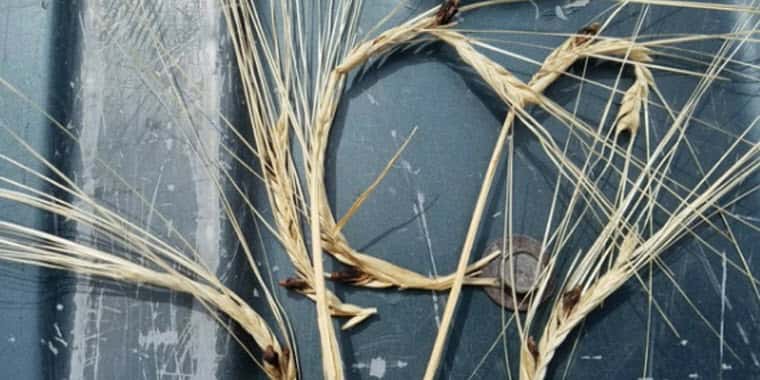 Ergot Disease on the Rise in Wyoming Bighorn Basin Barley

Producers have reported increased ergot disease this summer in the Bighorn Basin barley crop, says University of Wyoming plant pathologist William Stump. Ergot is poisonous to humans and livestock, and entire Wyoming fields have been rejected by the elevator.

Ergot disease, caused by the fungus Claviceps purpurea, affects cereal crops and grasses during flowering. Later in the season, compact masses of fungal tissue, called ergots or sclerotia, are produced instead of normal grain. The soft, dark-colored ergots may be the same size as or larger than the grain they replace.
“Ergot disease occurs sporadically every year in Wyoming and other High Plains states and is seldom a major problem,” said Stump. Cool, wet springs the past few years and adoption of minimum tillage systems have led to an increase in the disease in the region, he said.

Small grains susceptible to ergot disease include rye, wheat, durum, barley and oats. Wild and domesticated grasses that may be affected include brome grass, rye grass, orchard grass, foxtail and timothy.
The disease can reduce small grain and grass seed production as much as 10 percent. Although most ergot can be cleaned out of grain with gravity-type cleaning equipment, producers incur further losses when contaminated grain is discounted or rejected by the elevator.

Ergot contains toxic alkaloids that cause a livestock disease called ergotism. Human poisoning was common in Europe during the Middle Ages, caused by eating ergot-contaminated rye bread.
The ergot sclerotium, the overwintering structure of the fungus, can survive up to two years on or just below the soil surface. In the spring, under proper moisture and temperature conditions, sclerotia germinate and release spores that can infect grain heads in flower. Infected plants exude sweet, sticky honeydew that covers the immature sclerotia.

Within the honeydew, the fungus produces more spores, which are spread by direct contact, rain splash and insects. Insects attracted to the honeydew are the primary vector for long-distance spread as they visit other grass heads in flower.

Prolonged periods of cool, wet, cloudy weather lead to longer flowering and honeydew production, thereby increasing chances of infection. The disease cycle completes when the sclerotia mature and fall to the ground or when contaminated grain is planted.

There are no recommended chemical controls, says Stump. Management of ergot disease starts with using seed that is not contaminated with sclerotia.

-Mow ditch grasses before they head if they are near susceptible fields.

-Use deep tillage to bury sclerotia more than one inch in fields with heavy ergot infestation.

For more information on ergot disease, contact Stump at wstump@uwyo.edu or (307) 766-2062.
To learn more about cereal crops in Wyoming, see http://bit.ly/cerealcrops. Other publications from University of Wyoming Extension on crops, crop diseases, and avoiding livestock poisoning are available as free downloads at http://bit.ly/UWEpubs.