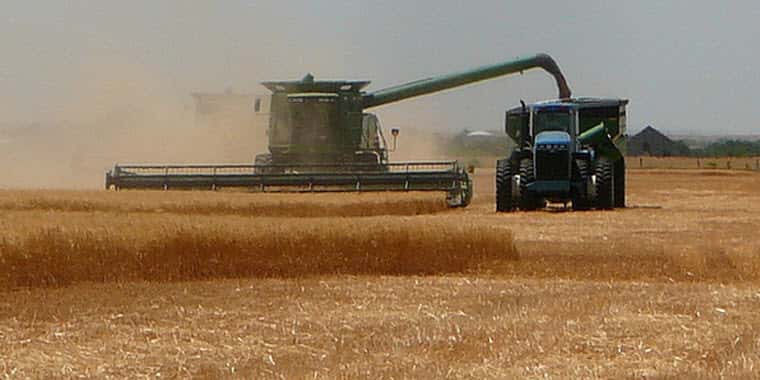 Before providing a simple and straightforward description of the global wheat and grain markets, Mike Krueger paused to consider a handful of variables facing importers, exporters and producers.

Then he used a word that is opposite of simple and straightforward.

The quality and reliability of U.S. wheat has long created demand among importers, Krueger noted. Due to increased competition for acreage, political and economic strife in key regions and the potential for weather events to influence yields, Krueger expects demand will expand.

“A primary reason is that global wheat supplies are likely to shrink due to a renewed focus on soybeans and corn,” Krueger said. “Another factor favoring U.S. producers involves shipping and logistics limitations that hamper competing wheat-growing countries.”

“These things are pushing more export demand for wheat,” Krueger explained. “Can the U.S. meet the demand? That’s a question that hasn’t been answered. will corn, soybeans or wheat be planted? Business decisions are made every single planting season. Our acres are limited.”

Effects of ‘Rush to Crush’

and demand at the international level. During his “World Supply and Demand Update” presentation at the USW conference, Krueger reported conditions that are ripe for volatility that could continue for years.

“We have tight global supplies to begin with, and we also have a lot of issues that complicate things – including a war in the Black Sea region,” Krueger said, referring to the Ukraine-Russia battle that has the wheat industry keeping a close eye on the news. “Another thing is what we call the ‘Rush to Crush.’ The demand for renewable diesel and other renewable fuels is erasing vegetable oil supplies and that will dramatically boost demand for soybeans and canola. And a new interest in sustainable aviation fuel (SAF) is just one more item that will put pressure on soybean supplies.”

The Rush to Crush movement includes significant investment in soybean crushing facilities in the U.S., setting up a situation where farmers will be enticed to dedicate more acreage to soybeans. This while corn supplies remain tight everywhere, Krueger noted.

“It’s being estimated that perhaps 20 to 30 million more acres of soybeans would be needed to meet such demand, which certainly would be a huge factor in the competition for acreage that we already see,” Krueger said.

Corn seeded area is expected to ramp up as U.S. ethanol demand increases due to high gas prices and enhanced ethanol allowances. Corn exports by the U.S. could rise, too, as China’s surplus stock is typically overstated, according to Krueger.

All this while drought cut soybean production across South America and Brazil’s safrinha (second crop) corn production is smaller than what had initially been estimated.

Ukraine and Russia export roughly 30% of the world’s wheat – and Russia has a record crop under its belt – but the ongoing war is an intangible, Krueger pointed out.

“Russia has record production, yet the question is do they have the logistical capacity to export the crop – logistics on the Black Sea are a mess,” he said. “As for Ukraine, the war could really affect their production. Plus, it’s suspected that the amount of wheat that could come out of Ukraine is overstated. It’s really an unknown at this point.”

Where does this leave the U.S. wheat industry? Krueger summed it up with a series of questions, such as: Are there any supply “cushions” outside of Russia and Australia, which is also expecting increased production?

Will world consumption somehow contract? Krueger reminded everyone that “It rarely has.”

Are China’s production numbers real? “Everyone is skeptical,” he warned.

And finally, how will world politics – the war in Ukraine, China’s relationship with Taiwan and ongoing inflation concerns in the U.S. – affect the grain markets and global trade?

Krueger returned to his original assessment.

What Does Agritourism Mean for Producers in Montana?