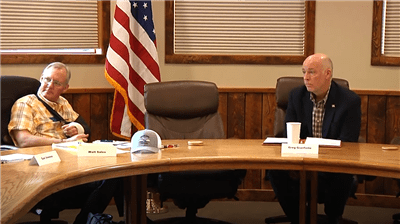 “I'm a business guy like you all and sometimes to get a deal done you've got to walk away from the table a few times and then come back.” Gianforte also added that “I do know that President Trump is in the midst of renegotiating NAFTA to make it better for America and I applaud that work and I'm just not sure how much of this is posturing to get a better position at the negotiation table.”

The Congressman stated that he didn’t know what President Trump specifically is thinking about in the NAFTA renegotiation. He did note that he believes that broad-based tariffs are bad for Montana farmers and ranchers.

Gianforte told Farm Bureau leaders that he is committed to being a voice for the livestock industry in dealing with the Electronic Logging Devices (ELD’s).

“These ELD’s are another example of federal overreach having a negative impact on our precious way of life here in Montana. I co-sponsored a bill to delay it for two years. I've sent now I think three or four letters calling out the ridiculousness of these new rules.” Gianforte added that he was “pleased that we got a 90-day extension for the industry. Every single Monday we sit down with the staff and say what are we going to do to get this ELD mandate overturned because of its negative impact on AG here in Montana.”

Another top priority Montana Farm Bureau members brought up at the meeting was the importance of the 2018 Farm Bill. Specifically, the need for research and development funding in the bill to help enhance agricultural research across the nation.

“The research in the Farm Bill is critically important to Montana. I visited with Fort Keogh. I've been up to the centers researching varietals particularly this up uptick in pulse crops is in part related to the research has been done there,” Gianforte said.

Gianforte said he’s reached out to multiple agriculture groups to make sure Montana farmers and ranchers voices are heard in the Farm Bill debate.

“I have collected input from about a dozen producer organizations in the state. Last fall I sent a letter to chairman Conaway of the AG committee to make sure Montana's fingerprints get on that bill, and we're following up on a regular basis,” Gianforte noted.

On the status of the Farm Bill, the Congressman said “We did have a little delay this week in getting the bill text out. I understand we'll see it early in April. I'd encourage folks as they get a chance to read through the bill that something doesn't make sense to them reach out to our office and let us know.”

Other issues covered at the roundtable included forest management, water compacts, and the positive impacts tax reform has had on agriculture.