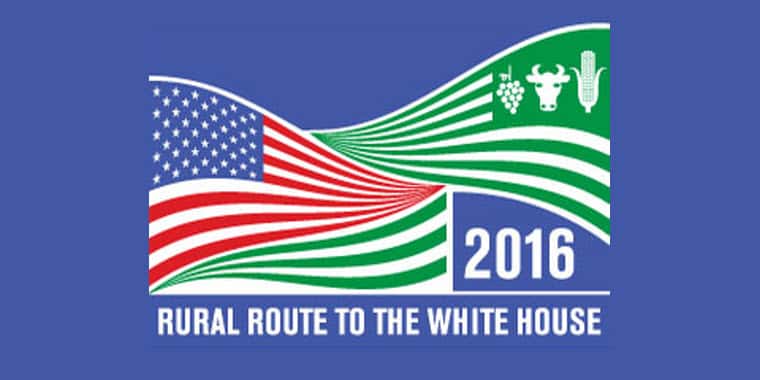 The Montana Farm Bureau is closely following the “Rural Route to the White House,” U.S. presidential election coverage produced and distributed by Agri-Pulse. The American Farm Bureau is officially the exclusive sponsor of this coverage. The coverage will be focused on the agricultural perspective of the presidential election, including the candidates’ positions on key farming and ranching issues.

“Most news services don’t focus on agriculture, so the fact American Farm Bureau and Agri-Pulse are offering this service is significant,” said MFBF Executive Vice President John Youngberg. “This will provide farmers, ranchers and others involved in agriculture insight into the candidates’ knowledge and interest in agriculture.”

The following information was gleaned during the candidates’ stop at the Iowa State Fair and reported by Agri-Pulse.

Some presidential candidates addressed agricultural issues specifically while, some touched on other issues that affect agriculture.  Other than making comments about immigration reform, current Republican front runner Donald Trump did not say much about agriculture during the Iowa State Fair.

Republican candidate Chris Christie supports farmers and twice vetoed bills that would have banned gestation crates for hogs. He noted that there are very few hog producer left in his state, and those that do don’t use crates. He noted, “I believe farmers should be able to make decisions about how best to raise their livestock, not some bureaucrat.”

Republican candidate Ben Carson explains that he enjoys a steak or hamburger from time to time and is not a vegetarian as previously reported. The candidate did say that farm subsidies need to be phased out, but over a 10-year period as not to “pull the rug out from under people.”  The neurosurgeon also suggested that the government could fund more research in clean fuels and alternative energy with the revenues that would come from loosening restrictions on exporting oil.

Candidate Texas Senator Ted Cruz spoke out strongly against overregulation and addressed the problems with EPA’s controversial Waters of the US (WOTUS). In his speech at the Iowa State Fair, Cruz promised to rein in the “out of control” regulatory agencies that “descend like locusts on farms and ranches and small businesses.” Cruz singled out the Environmental Protection Agency.

Candidates Carly Fiorina, Scott Walker and Jeb Bush all oppose EPA’s WOTUS rule. Fiorina explained that farmers used water for their livelihood, so who knows better about their water, a farmer or a bureaucrat? Walker noted that farmers would be much more comfortable working with their states on regulatory water issues than with the bureaucrats at the EPA.

Walker and Fiorina disappointed Iowa ethanol supporters with their calls to reduce and phase out ethanol mandates, with Walker saying he would do so in two years and Fiorina committing to phase out mandates “over time” without setting any specific deadline.

On the Democratic side, Hillary Clinton addressed strengthening the Renewable Fuel Standard, noting that Iowa farmers provide roughly one-third of the state’s energy in renewable fuels.  As for immigration, she realized farmers need migrant work labor to harvest crops and promised reform that worked.  She said she would support the next generation of farmers by doubling funding for the Beginning Farmers and Ranchers Development program.

Former Maryland Govenor Martin O'Malley promised to fight agricultural mergers if he's elected president, and also touted his efforts to clean up the Chesapeake Bay, which has agricultural runoff issues similar to those facing Midwest states. O’Malley noted that there needs to be tougher anti-trust enforcement, saying that the consolidation agribusiness firms and meatpackers are “putting the screws to the farmers and agricultural communities.”

Montanans may be interested to learn that one Democratic candidate, Lincoln Chafee, went to Montana State University to learn farriery. He worked at racetracks before heading back to Rhode Island to go into politics. The former Senator from Rhode Island told Agri-Pulse, “Farming is important, not just for the politics or practical aspects. I believe in protecting our land. There is nothing more basic than having food.”