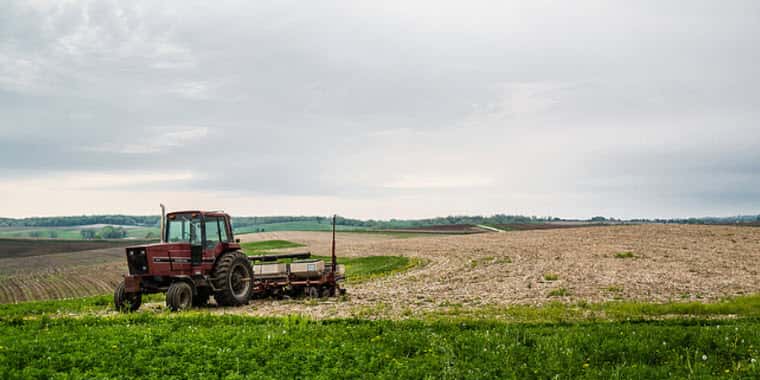 There’s an old truism (among many) about farmers: Farmers have to be optimists, or they wouldn’t still be farmers.

That saying rings true today, and maybe more than ever. Coming up on a fifth year of low prices, farmers will soon hit the fields—at least hopefully—to put this year’s food into the ground. Unfortunately, optimism is one of the few things farmers have to lean on heading into the growing season.

The Ninth District’s farm economy might generously be described as struggling to tread water. The blame for this is mostly low prices, which have fallen significantly from high levels generally seen from 2011 to 2013, and longer for some commodities. But it’s also only part of the story. While prices are significantly lower than they were earlier this decade, many commodity prices are above those seen in the previous decade. Corn, for example, averaged about $3.50 a bushel in 2018; it was below $2 for a period in the early 2000s.

But farmers are dealing with a host of compounding problems, including production costs that have remained stubbornly and usually high. For example, total costs for inputs like seed, fertilizer, pesticide, fuel, and electricity have risen by 50 percent (inflation-adjusted) since 2006.

Farmers are also a victim of their own success. High yields in recent years have created record or near-record harvests in many commodities, and demand has not increased in kind. Tariffs have also created some trade-induced interruptions in international demand for U.S. commodities. Data from the U.S. Department of Agriculture show soybean exports to China since September are down by more than 80 percent.

Add it all up, and many commodities are looking at high inventories. For example, South Dakota soybean growers harvested a record crop in 2018. That represents real, immediate financial relief for individual farmers, but it exacerbates oversupply issues that are at the root of lower prices. December soybean stocks nationwide stood at 3.7 billion bushels, an all-time high, and a 20 percent increase over a year earlier. As recently as 2012, soybean stocks were at 2 billion bushels. Ending stocks in most crops are high and, without some significant supply shock, most analyses suggest that low prices will hold at least through this year.

Not surprisingly, another year of low prices is compounding stress among farmers. For example, chapter 12 bankruptcies in the Ninth District have increased steeply since 2014, and much more so than in the nation as a whole. Bankruptcies are rising in all district states, but are particularly pronounced in Wisconsin and more notably in the western half of the state. Anecdotal evidence suggests that the state’s smaller average farm size, particularly in dairy, is at least part of the reason for the uptick.

Agricultural banks are feeling some stress from deteriorating farm balance sheets, but overall are still healthy. Ag banks are defined as commercial banks where loans to finance agriculture production, plus loans secured by farmland, comprise at least 25 percent of the loan portfolio.

There about 260 ag banks in the Ninth District and, while conditions have deteriorated some, most metrics suggest that ag banks are still in decent shape. Leverage ratios, for example, measure how much debt a bank has compared with total assets. The so-called tier 1 leverage ratio measures core capital (called tier 1, or the most stable and liquid capital in a bank) against total assets; higher ratios mean the banks have greater capacity to withstand negative shocks to their balance sheets.

The tier 1 leverage ratio shows that ag banks in general are in good shape regarding financial risk, in both the district and the nation. The median measure for district ag banks currently lags the national median measure, but that’s historically been the case.

The quality of underlying assets also matters and, so far, district ag banks have shown few signs of real weakening. While total noncurrent loans have risen of late—and risen more among district ag banks compared with those nationwide—levels are still at or near their pre-crisis levels.

Bankers apparently don’t have the optimism of farmers either; the most recent quarterly ag credit survey, conducted in January by the Minneapolis Fed, found that bankers widely predicted lower capital spending and net farm income for the coming three months, as well as more weakness in loan repayments.

Loan demand was also predicted to go up, which could be considered a good thing for bankers, except that credit quality was expected to deteriorate given low commodity prices and falling farm incomes. As a result, more banks are seeking higher collateral rates for ag loans. And, in a cruel twist, extreme winter weather and heavy snowfall have led to the collapse of or damage to hundreds of barns and other farm buildings, along with further damage to equipment and the loss of livestock. The subsequent spring thaw has compounded matters with floods across much of the district, with further losses of livestock, buildings, and machinery.

It’s enough to test even the most optimistic farmer limping out to fields this spring. As a rural banker in Minnesota said via the January survey: “Producers are dealing with multiple years of economic pressure. … We are seeing economic stress rising significantly.”