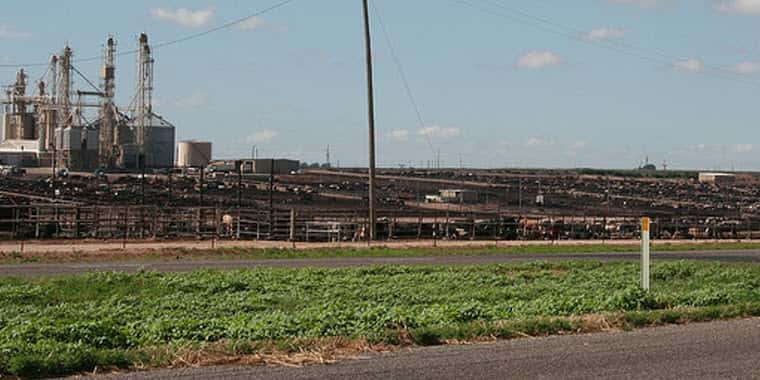 Feed vs. Food: Are Cattle Really Taking Food Out of Our Mouths?

In 40 years, the global population is predicted to contain more than 9 billion people, and demand for food, fuel and fiber will increase by 60 percent.  Out of those 9 billion people, 8 billion will live in the developing world, where inhabitants of regions such as China and India will have household incomes similar to those in the developed world, and will demand more milk, meat and eggs.  The cattle industry therefore faces a considerable challenge in producing sufficient beef to fulfill global demand; yet two common claims leveled at the industry are that: 1) corn fed to cattle could feed humans instead; and 2) the quantity of land used for grazing would be far more effectively used to produce grains or vegetables for human consumption. However, there are a number of bigger issues to consider.

The oft-quoted statistic that one-third of cereals are fed to livestock leads to the seemingly logical suggestion that meat consumption should be reduced in order to feed more people with grains. Cereal crops are the staple food source within the developing world but are also the nutritional foundation of the developed world – in this instance they are an indirect food source because they are first converted to animal protein. The assumption that reducing meat production will increase the availability of cereals for human food only holds true if ingredients (crops) are edible by both cattle and humans. This is not the case for many feed crops (e.g. field corn) and fails to account for one major factor – livestock diets include a considerable quantity of by-products from human food, fiber and fuel production that are inedible by humans because of safety, quality, cultural or digestibility considerations.

We have seen significant achievements in cattle genetics and nutrition over the years, and feed:gain ratios of less than 5.0 lb/lb are not uncommon in modern feedlots. However, activist groups are quick to use feed efficiency as an argument against cattle production, with claims that it takes 12, 15 or even 30 pounds of feed to produce one pound of beef. Corn only accounts for 7 percent of the total feed used per pound of beef – the rest comprising other grains, by-product feeds, and, by a vast majority, the pasture and forages consumed by cattle in cow-calf and stocker operations. Pasture grasses are invariably indigestible by humans, thus when we examine feed efficiency we need to do so not on the traditional “lbs of feed:lbs of gain” basis, but according to how much of the feed fed to cattle could instead be eaten by humans.

The ability to turn pasture grown on land where we cannot grow human food crops due to unfavorable terrain, climate or fertility, into high-quality beef is a huge benefit for the cattle industry. Assuming that meat consumption was reduced, other food crops would have to be grown to fulfill human demand because although cattle are quite content to be fed a diet of pasture or corn, humans demand dietary variety. At present, only 8 percent of pastureland in the U.S. is productive enough to be classified as cropland pasture by the United States Department of Agriculture (USDA). What would be the environmental consequences to increase this number, in terms of the vast quantities of fertilizer and irrigation inputs (in addition to land-leveling) required to render rangelands suitable for growing artichokes, carrots or zucchini?

Nutrient-dense meat, milk and eggs represent the most affordable source of many vital dietary nutrients, including the zinc, iron, protein and seven other essential nutrients provided by beef.8 Aside from nutritional benefits, the by-products supplied from cattle –including leather, fertilizer and pharmaceuticals – and the social and economic importance of livestock ownership in developing countries should not be underestimated. Indeed, globally, almost one billion households rely on livestock for their livelihood.9 As the population continues to grow, cattle will play an integral part in food production by converting feeds that are inedible by humans into high-quality, nutritious, affordable beef. The challenge is to help consumers understand that traditional feed efficiency is not the only metric that should be used when assessing the value of the beef industry.