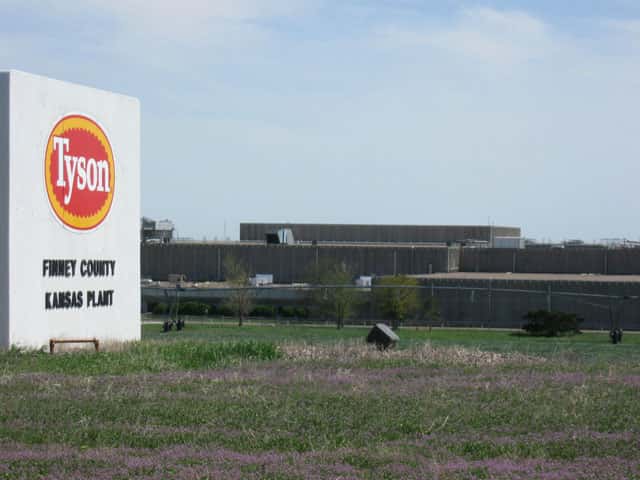 Tyson Foods said Monday its beef plant in Holcomb, Kansas, will be shut down indefinitely after a weekend fire, but the company will rebuild and employees will be paid until production resumes. The plant is located in Holcomb, Kansas, but is often referred to as the Garden City plant, which is nearby.  About 1,200 workers had to be evacuated from the plant Friday night when the fire broke out about 8:30 p.m. CDT. No injuries were reported from the fire.

The Wall Street Journal reported the Holcomb facility processes up to 6,000 cattle a day, which accounts for about 5% of U.S. cattle slaughter. Steve Stouffer, group president of Tyson Fresh Meats said the team members may be called on to work during this time to help with clean-up and other projects, but regardless of the hours worked, all full-time active employees are guaranteed pay. A spokeswoman for Tyson said about 3,800 people work at the plant.

Tyson Foods operates six plants in Kansas, and Stouffer said the company is taking steps to move production to alternative sites. “Tyson Foods has built in some redundancy to handle situations like these and we will use other plants within our network to help keep our supply chain full,” Stouffer said.

In a statement released Sunday (Aug. 11, 2019) Tyson said it is still assessing the damage and a timeline has not been established, but work to clear the damage has already begun.

The fire sharply reflected on futures trade and caused the cattle complex to fall to limit down numbers on Monday following the fire.