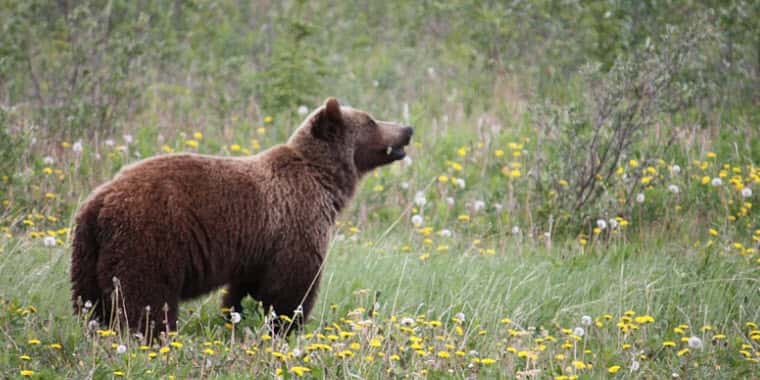 BILLINGS, MT (August 10, 2016) – This has been an unprecedented year for grizzly bears as more and more of them move further out from their traditional home on the Rocky Mountain Front and onto the farms and ranches located on the plains in north central Montana.  Last week, USDA Wildlife Services confirmed that a Grizzly bear or bears killed 13 sheep in an area of the Sweet Grass Hills where locals say they have never seen any bears.

The owner of the sheep, Montana Wool Growers President Dave McEwen has, over the past 20 some years of raising sheep, implemented several predator control measures to protect his herd from their primary predator, coyotes.  Such measures included guard dogs, some fencing, and daily checks through the herd.  During a morning walk through the sheep last week, McEwen originally thought it was coyotes when he found the first killed lamb.  By the third dead lamb, he knew he was looking as something else entirely.

“I see it's not a kill pattern typical of a coyote and now I'm concerned.  I tried to prove every suspicion of what is isn't before narrowing it down to what it had to be.”

McEven then called USDA Wildlife Services to confirm what had killed the sheep.  “At that time, we confirmed it as a bear, found tracks that confirmed it was a Grizzly, and the only thing we didn't confirm is that it's most likely a pair.”

“We don't know where they came from.  We're 100  miles from the Rocky Mountain Front and we've never had bears up here.  We have residents that have been born and died here who have never seen a bear in the Hills.  It's an over-population issue and it's causing them to move into areas they've never been before,” McEwen said.

Of the 13 sheep killed, he noted that only one had actually been eaten at all.  The rest were just simply killed.  An attempt was made to trap the bears by FWP and Wildlife Services without any success and the traps were removed on Tuesday.

Another issue for the local landowners is the impact that having an endangered species in the area is having on predator control.  As one of his predator management tools, McEwen uses an M-44 device around his sheep herd to help control coyotes. The spring-activated device delivers a dose of cyanide powder to the coyotes who activate the trigger by pulling on a piece of bait attached to the device.  Wildlife Services work with landowners to place and maintain the devices, however they are not approved for use on an endangered species like Grizzly bears

“With a confirmed  bear sighting in the area, Wildlife Services has to remove all their M44 type devices in the area.  For us, that's 10 or 12 sets. These have helped keep the coyotes off the sheep and keep the predation, because of coyotes, down to reasonable levels,” said McEwen.

“The only coyotes that we take with the M44 devices are coyotes that come into the sheep because that's where the M44's are set.

“Where I get really angry now, because of two marauding bear who have leaked off the Front, now we have to lend ourselves to the mercy of coyotes.  The 13 or so sheep killed by the bears could pale in comparison to what a pair of coyotes could do to me.  However if you leave the bears out there, killing 13 a night, it won't take long to take you out of this business.”

Landowners are extremely restricted in how they can protect their animals when it comes to dealing with an endangered species like a grizzly bear, even killing a bear while it's attacking livestock is questionable as to whether it will result in a fine or not.  This leaves  McEwen was critical of FWP's management of the Grizzly bears to date. “This is Montana, granted but I don't think I should have to provide a nutritional lunch counter for these bears.”