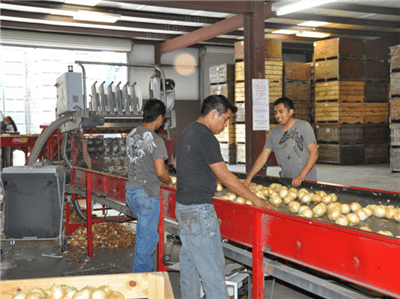 Senior administration officials outlined the latest executive order on Monday to reporters. The president is expected to highlight the new rules at an event Tuesday at the headquarters of Snap-on Tools in Kenosha, Wisconsin, as part of his efforts to tout American manufacturing. The “hire American” language is expected to target mainly the H-1B visa program, which White House officials said has been abused by many U.S. companies who have eliminated U.S. jobs and replaced them with foreign workers who come into the country at lower pay levels. The H-1B program gets roughly 200,000 applications a year from companies to fill 85,000 slots allowed under the program.

Even as the administration drives home an emphasis to back foreign workers, agricultural groups are pushing for a different set of reforms in the seasonal guest-worker program for agriculture — the H-2A visa program. The White House did not indicate any changes to the H-2A program for agriculture, which brought in as many as 160,000 seasonal workers for farmers last year.

The dairy industry is calling on Congress to embrace a pair of bills that would allow H-2A to be used not just for seasonal work, but year round.

“Dairy farming is a physically demanding, 24-7, 365-day job. Without the help of foreign labor, many American dairy operations face the threat of closure,” said Jim Mulhern, and CEO of the National Milk Producers Federation. “We appreciate that members of both parties are building awareness of the need for action on this challenge.”

Agriculture has largely been left on the sidelines of some of these policy discussions as USDA awaits the confirmation vote on Sonny Perdue, which is expected to happen as soon as next Monday when the Senate returns. Perdue has indicated he would advocate for changes to the H-2A program for dairy farmers.

Craig Regelbrugge, national co-chairman of the Ag Coalition for Immigration Reform, said in an email to DTN that agriculture has a lower profile in the immigration debate right now, partially because there is no agriculture secretary yet. Regelbrugge also said H-2A farmers go through a lot of effort trying to find U.S. workers before applying for the guest-worker program.

“We are hopeful that this administration will recognize the role that a well-functioning, agricultural worker program can play in growing rural economies and employment in the off-farm but farm-dependent sectors that support specialty crop and livestock production,” Regelbrugge stated to DTN. “There is much they could do to improve the current program, though a full solution to the agricultural labor crisis will ultimately require federal legislation.”

Other agricultural groups, including fruit and vegetable growers, have pitched to Congress several other changes to the H-2A program that would make it easier to bring in additional seasonal workers and allow those agricultural workers to remain in the U.S. longer.

A Trump administration official, who explained the executive order to reporters, said companies had diluted the rules and abused the use of waivers to bring in such workers. The impact is the H-1B workers end up lowering wages for Americans. “These reforms are broadly supported by groups that American workers in the United States,” the White House official said, speaking on condition of anonymity.

The White House official added that the Departments of Labor, Justice, Homeland and State are all prompted the executive order to take action, cracking down on fraud and abuse in the immigration system.

The executive order will also include changes to federal procurement programs to reduce contracts going to foreign companies. The order will place new requirements on federal agencies before they offer a contract to a foreign vendor. The buy American process will take into account foreign dumping practices and waivers of American in free-trade agreements. Such waivers might now become part of new trade negotiations or be revoked by the administration.

Chris Clayton can be reached at chrisclayton.@dtn.com

Bovine TB Identified in a Cattle Herd in Michigan