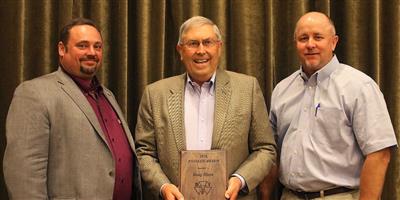 Professor Emeritus Hixon joined the UW animal science faculty in 1982 and worked as a professor, researcher and extension beef cattle specialist for 19 years before being named department head in 2001. In that role, he oversaw an integrated program in teaching, research and extension. He retired in 2013.

The Pioneer Award recognizes those who have made lasting contributions to the improvement of beef cattle and honors those who have had a major role in acceptance of performance reporting and documentation as the primary means to make genetic change in beef cattle, according to the BIF.

A native of Donovan, Ill., Hixon earned his bachelor's, master's and doctoral degrees in animal science at the University of Illinois.

He received the Distinguished Service Award from the Western Section, American Society of Animal Science, and also received the UW President's Faculty Stewardship Award for building external relationships and promoting fundraising programs.
Hixon served as the BIF Western Region secretary from 1986-1994. He was a recipient of the BIF Continuing Service Award in 1996.

More than 600 beef producers, academia and industry representatives were in attendance at the organization's 48th annual convention.

Photo Courtesy of the University of Wyoming Extension.  Doug Hixon received the Beef Improvement Federation Pioneer Award at the organization’s annual convention in Manhattan, Kan., last week. Hixon was a faculty member in the Department of Animal Science from 1982 until his retirement in 2013.