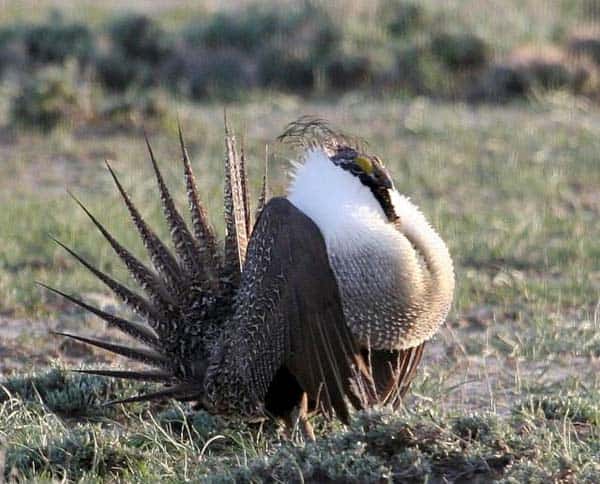 Give the Sage Grouse Power to the States!

The following is a press release from the AFBF:

WASHINGTON, D.C., May 22, 2014 – The American Farm Bureau Federation has endorsed a bill to prohibit the federal government from listing the sage grouse under the Endangered Species Act as long as states prepare and carry out plans to protect the species within their borders.

The Sage Grouse Protection and Conservation Act, introduced today by Rep. Cory Gardner (R-Colo.) would empower states to protect the bird with habitat that covers 186 million acres and 11 states. It is expected that Sen. Mike Enzi (R-Wyo.) will soon be introducing companion legislation in the Senate.

“The bird’s range is vast and because of that the wildlife management and conservation efforts for the species would vary widely from state to state,” said AFBF President Bob Stallman. “It is clear that conservation plans developed at the state and local levels provide the greatest opportunity for success.”

Stallman said that evidence shows locally developed programs, in which landowners played a role in development, are better received and more effective than federally mandated top-down programs to which landowners can only comment after the fact.

“States have better knowledge of the landscape, needs of species that inhabit the landscape, and needs of landowners,” Stallman said, adding that a number of new and ongoing state and local efforts to achieve stable, healthy populations of sage grouse should be allowed sufficient time to demonstrate success prior to federal intervention from the U.S. Fish and Wildlife Service.

“Approximately 76 percent of all listed species occur to some extent on privately owned lands and more than one-third occur exclusively on privately owned lands. While the sage grouse proposal is specific, a broader application of the state-focused model could prove to be successful in prioritizing effective species conservation efforts by state wildlife agencies and preventing unnecessary federal intervention.”