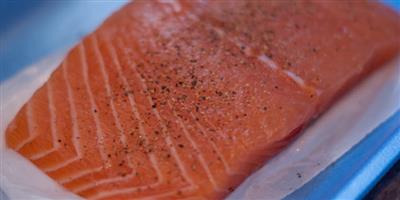 GMO Salmon Cleared for Human Consumption in the U.S.

by Julie Steenhuysen and Tom Polansek

U.S. health regulators on Thursday cleared the way for a type of genetically engineered salmon to be farmed for human consumption in the first-ever such approval for an animal whose DNA has been scientifically modified.

After five years of deliberations, the Food and Drug Administration said it had determined that genetically modified salmon was safe to eat and as nutritious as conventional farm-raised Atlantic salmon, which means the new product will not require special labeling.
Massachusetts-based AquaBounty Technologies developed the salmon by altering its genes so that it would grow faster than farmed salmon, and expects it will take about two more years to reach consumers' plates as it works out distribution. AquaBounty is majority owned by Intrexon Corp, whose shares were up 7.3 percent at $37.55 in afternoon trading.

AquaBounty says its salmon can grow to market size in half the time of conventional salmon, saving time and resources. The fish is essentially Atlantic salmon with a Pacific salmon gene for faster growth and a gene from the eel-like ocean pout that promotes year-round growth.

Activist groups have expressed concerns that genetically modified foods may pose risks to the environment or public health. Several on Thursday that said they would oppose the sale of engineered salmon to the public, while some retailers said they would not carry the fish on store shelves.

Kroger Co, the nation’s largest traditional grocery chain, has “no intention of sourcing or selling genetically engineered salmon,” spokesman Keith Dailey said. Trader Joe's and Whole Foods Market Inc also confirmed that they do not intend to carry the product.

Target Corp eliminated farm-raised salmon in favor of wild-caught salmon in 2010, which spokeswoman Molly Snyder said was the first step in a long-term commitment to improving the sustainability of our seafood assortment. “We are not currently planning to offer genetically engineered salmon,” Snyder said.

Real Montana is the Real Deal