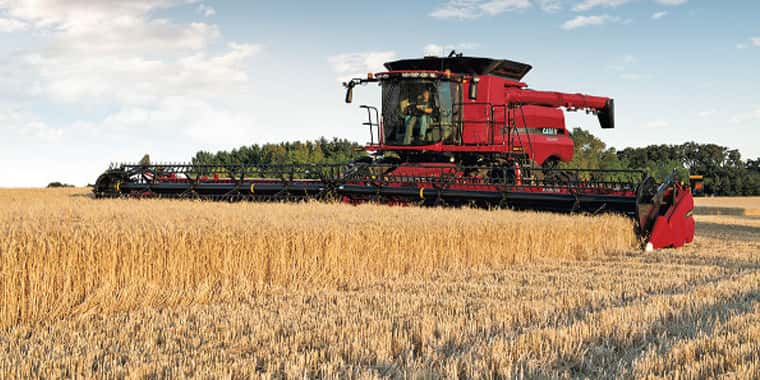 Grain Piling Up Due to Rail Backups

Railroads are still running behind as wheat harvest pushes north.

OMAHA (DTN) — With railroads still running behind on grain car orders and a large wheat crop starting to pour in, elevators in the Northern Plains are having a challenging time finding enough space to store all of the incoming grain.

In their weekly service update to the Surface Transportation Board, Robert Johnson, CP senior vice president of operations, told the STB that “it is our intention to run scheduled extra trains every week to support the harvest. We continue to move U.S. grain within the ranges outlined in our plan. Last week, week 50, we fulfilled 2,139 grain car orders in the United States.

“With respect to the Rapid City, Pierre & Eastern Railroad (RCP&E), CP provided RCP&E with additional locomotives to support extra train starts this week. We also delivered 319 grain cars to RCP&E, which is at the lower end of our guidance. Unfortunately, operational issues persist on both railroads.” Here is the link to view the entire CP filing to the STB: http://goo.gl/…

Grain elevators on the RCP&E find little comfort in the CP comments as they are nearly filling up with a high-yield winter wheat harvest. In at least one case, an elevator has had to pile winter wheat on the ground, and another elevator was reportedly bagging it because there were no cars to move grain.

The scary part is that winter wheat harvest is only 40{ba1edae1e6da4446a8482f505d60d3b8e379ff6dedafe596d9ba4611a4e33a48} done and so far is yielding 75 to 90 bushels per acre. Luken said that his spring wheat crop is the best he has ever seen, not to mention the nice corn crop in his area. Luken said he is currently behind 253 cars. With that total and what he has ordered for next month, he is expecting 457 cars by September.

“Our line, the RCP&E is at the mercy of the CP rail which services that line.” Luken said. “I was supposed to get a 50-car train this week,” Luken said, “but it went to another elevator.” Luken said he needs the 50 cars to come soon because he owes a train of spring wheat and train of corn he previously contracted. “And I need space for more winter wheat,” he added.

In their weekly service update, the BNSF said on July 25 that, “For the week ending July 22, the seven-day average for the number of trains BNSF had on the system rose to 1,874, which is an average of 27 more trains than the prior week. More trains on the system can also mean more congestion and slower train speeds. However, train velocity, on a miles per hour basis, has remained steady and locomotive velocity, which we measure as miles per day, is up slightly week over week. So despite more trains on the system, we have been able to move them faster.”

CN RAILROAD SAYS THEY ARE READY TO HANDLE HARVEST

On the Canadian National railway website July 31, the CN said “Canada's rail transportation system is ready to accommodate the new harvest with a solid throughput rate in line with the grain supply chain. The supply chain will also be able to address the excess carry-over from last year's extraordinary crop by as early as next spring.”

“We can be proud of our performance and for making good on the commitments we gave the federal government a month before the order-in-council requiring railways to move specific grain volumes took effect last March.

“By virtue of normal commercial incentives, the grain handling and transportation system is now fully back in sync and ready to accommodate the upcoming harvest.”

Many traders and analysts found it interesting that the CN would release this article the day before Bill C-30 goes into effect on Aug. 1. The Fair Rail for Grain Farmers Act (Bill C-30) sets minimum shipping levels for railways and will also give shippers more rail options “by extending interswitching rights to 160 km for all commodities,” according to news reports this week. Here is the link to the CN article: http://www.cn.ca/…

GRAIN NOT THE ONLY INDUSTRY HURT BY BACKLOG

A La Crosse-area power plant is reported to be almost out of coal to run their power plant. Dairyland Power Cooperative told the LaCrosse Tribune that “it could run out of coal at its Genoa, Wis., generating plant by January if the BNSF railroad doesn't rapidly accelerate deliveries.” To read more, here is the link to the story at LaCrosseTribune.com: http://goo.gl/…

The ethanol industry appealed to the STB earlier this month, asking for the same relief that the agency provided to grain shippers in June by directing the CP and BNSF to provide weekly grain service updates. Mike Feinman, DTN energy reporter, wrote earlier this week that spot ethanol prices and Rule 11 prompt values were talked higher in early trade at the Argo hub near Chicago on July 22, as rail delivery issues continue to plague the ethanol industry amid congestion in Chicago and delays for shipments out of the Midwest to the coasts. “Rail will likely be an issue for a while,” said an ethanol broker. “There's been some temporary relief here and there, but it's only going to get worse.”

This isn't the first time that rail logistics have hurt the ethanol industry. This past spring, shortages of railcars to move ethanol from plants to key hubs caused prices to surge higher. The logistics problems also caused many plants to slow runtimes because they were unable to move product. According to news reports in early July, a spokesman with the STB said they had received the letter from the industry, but had no comment on it. He said the STB constantly reviews rail service for all commodities shipped by train.