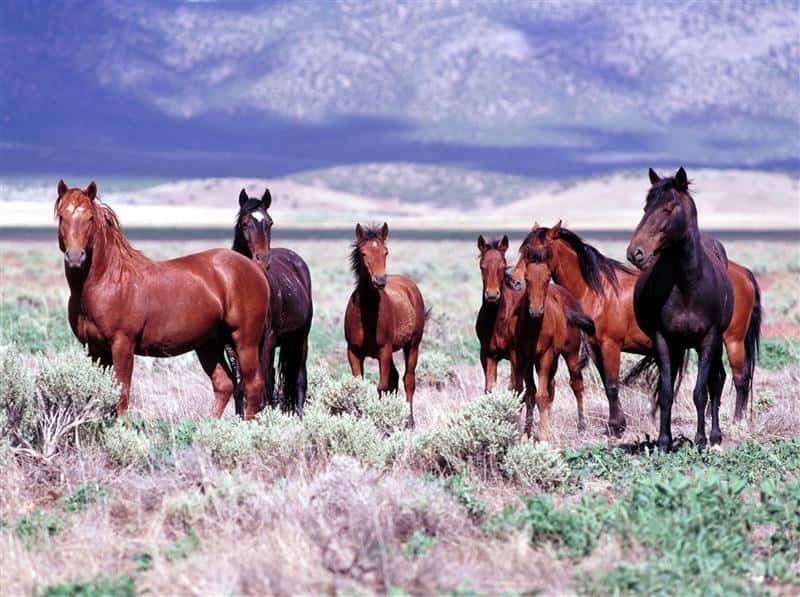 The following news release is from The Cloud Foundation:

COLORADO SPRINGS, CO. – Friends of Animals (FoA) and The Cloud Foundation have filed a petition with the U.S. Fish and Wildlife Service to list North American wild horses on public lands as threatened or endangered under the Endangered Species Act (ESA) since the Wild Free-Roaming Horse and Burro Act (WHBA), which was passed in 1971, has failed to protect our wild horses. Six states have already lost their wild horse populations – Missouri, Iowa, Arkansas, Texas, Oklahoma and Kansas.

“Misclassification of wild horses as a non-native species is politically, not scientifically driven,” said Ginger Kathrens, Executive Director of The Cloud Foundation. “Wild horses are severely endangered but without recognition of current scientific evidence of their native status, they could become extinct.”

“Now there are less than 35,000 on public lands, where they are supposed to be protected,” Barnes said. “The petition states that these few remaining horses are divided into even smaller herds, whose populations are so low that they are susceptible to being wiped out completely by a chance event or change in the environment. Instead of protecting these horses, or just leaving them alone, a government agency, the Bureau of Land Management (BLM), plans to remove even more horses from the range with expensive and cruel tactics, such as helicopter driving.”

BLM is obligated, under WHBA, to protect wild free-roaming horses as an “integral part of the natural system of public lands.”  BLM claims that wild horses need to be removed from public lands to protect rangeland health. However the vast majority of public land is open to livestock grazing, which causes far more damage to the land.

“The tragedy of horse roundups exists because the BLM appears devoted to turning arid western public lands into feedlots for cows and sheep to appease cattle producers,” said Priscilla Feral, President of FoA. “Friends of Animals finds this morally and ecologically reprehensible, as wild horses are driven off lands to leave the bulk of water, forage and space for two domestic animals owned by ranchers.

“We oppose the BLM's scheme of privatizing wild horses and insist all roundups end.”

Most people do not realize that instead of protecting these horses, BLM has rounded up-forcibly driven off the land and put in holding facilities-more than 200,000 horses since the WHBA was passed. And this is not just an issue of importance to American's living out west.

“Everyone's tax dollars contribute to the animal abuse caused by roundups,” Barnes said. “In the 2013 fiscal year, BLM spent $4.8 million on gathers and removals and spent $46.2 million on holding costs. A report by the National Academy of Science concluded 'the continuation of business-as-usual practices will be expensive and unproductive for BLM.'”

From the holding facilities, the horses are not supposed to be sent to slaughter. However, there have been reports that indicate that is what happens when some of them are “adopted.” There is also mounting fear, Friends of Animals says, that the government will start to kill horses in holding facilities, yet another threat pushing wild horses toward extinction.

“Every time the government restricts their habitat or takes them away from the range, it disrupts horses' social bonds and damages the overall fitness of the herds,” Barnes said. “However, saving wild horses in North America and letting them roam freely could bring balance back to our ecosystems. For example, wild horses can reduce fire risk by eating dry shrubs and help disperse and fertilize plant seeds through their droppings.”

Friends of Animals and The Cloud Foundation are asking their supporters to contact Secretary of the Interior Sally Jewell and tell her wild horses on public lands should be listed and protected under the ESA.  She can be reached at Department of the Interior, 1849 C Street, N.W., Washington DC 20240; 202.208.3100; feedback@ios.doi.gov.

To read the entire document go to: