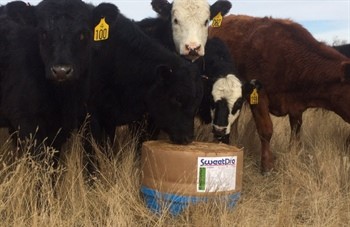 Successfully managing livestock for maximum profitability has become a scientific process with many factors to consider.  With the information provided by modern EPD’s and genetic testing, the increasing use of artificial insemination, and the plethora of health products and supplements available, today’s cattle are increasingly more productive than generations past.

By maximizing the genetic potential built in to these cattle, producers can yield animals who gain well, grade well, and produce growthy offspring and reducing production related inputs.  Ensuring optimum nutrition is a key component in livestock management, particularly with cattle, who’s digestive system is a series of complex microenvironments.  Proper nutrition can help improve feed efficiency, weight gain, and overall animal health.  One Montana ranch family has seen what a difference feed supplements can make in their own cattle herd.

The Herzog family has been ranching near Rapelje, Montana since 1952.  In addition to the roughly 35,000 acres of land they farm and run cattle on, brothers Courtney and Ryan Herzog, focus on raising cattle in a low input environment.  Currently, they care for a herd of 850 mother cows and 130 yearling heifers which they develop at the ranch.

Rapelje is a notoriously dry part of the state, making hay production a challenge even in the wettest of years.  “Our philosophy has been to get away from doing a lot of hay production and let the cows go out and graze” says Ryan.  “A lot of our focus is to get away from labor because we don’t have a lot of that.  Every time we put a machine between that cow and the forage, it’s costing us money.”  The ultimate goal for Herzog Farms is to get through the year on standing grass, utilizing range management techniques and adding in a high-quality feed supplement to meet additional nutrition requirements.

With no shortage of supplements available on the market, the brothers tried a number of liquids before deciding the labor and cost were making them an unsustainable choice. “The thing with the liquids is you have to have special equipment to handle it, and of course then you’re into cost again,” Ryan states.  “We all know the margins in this deal, the cattle business, none of them are getting any more friendly to the rancher.  We had a product we were using that was a DDG (dried distillers grain) based product but once again, you’re out there trying to pump a liquid when its ten below, fifteen below, when the cows really need it and well you can just imagine…”

While searching for an alternative supplement to labor intensive liquids and traditional molasses based blocks, the brothers were turned on to SweetPro Premium Feed Supplements by Kevin Haidle, a former ranch employee and current President of Agri Best Feeds. SweetPro differs from molasses based supplements with its blend of condensed distillers soluables, which are higher in fat and protein and lower in rumen pH reducing sugars.  This combination provides for long lasting energy and more efficient utilization of feed. SweetPro also includes a complete package of vitamins and minerals, proteins, and ProBiotein, a proprietary blend prebiotics, protein, yeast, and enzymes designed to help the digestive system perform at its natural best.  The combination of these ingredients yields a product that supports feed efficiency, growth, and overall animal health. At roughly the same per pound cost as molasses based supplements, less labor, and university studies backing lower consumption and higher performance, SweetPro seemed like a perfect fit for their operation.

It didn’t take long for Ryan to notice a change in their cow herd, particularly in the first calf heifers.  “We started developing our own heifers about six years ago and we’ve used the SweetPro product in front of those heifers from the day they basically hit the ground,” he states.  “We have it out there with their mothers, they know what it is.”  Their ability to self-regulate their feed intake and keep their condition on was one of the most impressive things Ryan noticed.  “Pasture and SweetPro.  Unless the winter is real tough, that’s all those girls get.”

When a cow’s digestive system is running in peak performance, other aspects of animal health fall in line too, particularly during high stress times like breed back.  “You’re asking a mother cow to do a lot during that time.  Keep condition on herself, feed the calf she’s got on her, and breed back again,” says Agri-Best Feed’s Scott Anderson.  “It makes sense that a cow who’s using her feed efficiently and filling any gaps nutrition wise would have better conception rates. The stress on her is just a lot less.”

Ryan Herzog agrees, “it’s hard to believe but we’ve had well over 95-96 percent conception on our heifers since we started using that product.”  This year specifically, Ryan says 140 head of first calf heifers had a 97 percent conception rate.  With the current prices in the cattle market, an open heifer is an expense ranchers can’t afford.  The only thing Herzogs have changed in their program is SweetPro, which they attribute the high conceptions rates to.  “We also have more twins than I have ever seen.  I’m about a quarter done calving out our cows and it seems like the SweetPro really helps make these girls fertile, they flush really well.”

The Herzog family aren’t the only ones who have seen such results with the use of SweetPro.  PBR Stock contractor, H.D. Page has seen similar conception rates in his breeding program since adding SweetPro.  “We went from the worst year ever, to the best year we’d ever had,” Page said.  “With the heat and dryness, we just couldn’t get the cows to cycle.  We went from conception rates of 65 to 70 percent to 97 percent bred in a single year.  The only thing we changed in our program was adding SweetPro blocks.”

Feed efficiency is the other aspect Herzogs noticed significant improvement on since adding SweetPro to their feeding programs.  After putting together a personal field trial comparing SweetPro to other supplements they had been using, the brothers like what they saw in the pastures with SweetPro. SweetPro is unique in its composition because it is not only providing supplemental nutrition to the cow but also to the microbes living in the rumen.  By keeping the microbes well fed, the cow is better able to digest and fully utilize her feed source.

H.D Page again echoed similar success with his performance bulls. “It really helps them utilize their feed.  Instead of 25 pounds of grain, we are seeing the same results with only 10 pounds per bull,” said Page.  “We don't want them big, but but want to see them fit and well-muscled.”   He noted that by looking at bull’s manure, he can tell if they are eating SweetPro or not by how well the grain is broken down.  “Particularly with corn, they just seem to be able to utilize it better.”

With the continuing advancements in cattle production, ranchers, like the Herzog family, looking to approach their operation in a more synergistic manner can rely for management tools like SweetPro to help them reduce inputs.  “It does what we need it to do,” Ryan states.  “If it didn’t, we wouldn’t be using it.”

*Content paid for by Agri-Best Feeds.  Results may vary. Agri-Best Feeds, headquartered in Billings MT is the regional distributor for SweetPro, covering all of MT, WY, NE, and northern ND.  Ranch delivery is available.  For more information on SweetPro and free estimates, visit them online at www.agribestfeeds.com, call them at 866 601-6646 or visit their headquarters at 33 N 15th St, Billings, MT.