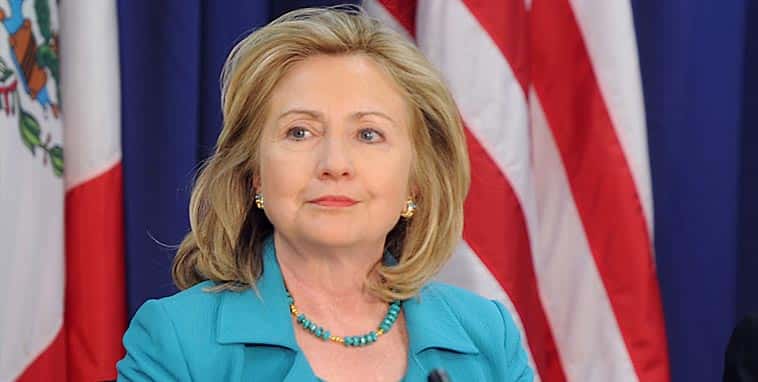 SAN DIEGO (DTN) — Hillary Rodham Clinton expressed enthusiasm for biotech seeds here Wednesday but told members of the Biotechnology Industry Organization they should promote the characteristics of genetically modified seeds rather than use the term “genetically modified” if they want the seeds accepted.

“'Genetically modified' sounds Frankensteinish — drought resistant sounds like something you'd want,” Clinton said in a paid speech to BIO's annual meeting, which attracts scientists, executives and investors from around the world.

The manufacturers of biotech seeds should “be more careful so you don't raise that red flag immediately,” Clinton told BIO CEO Jim Greenwood on the stage of the annual BIO convention here. It was Clinton's second paid speech to an agriculture-related group in two weeks.

Clinton told the biotechnology group she had promoted the drought-resistant seeds when she was secretary of state as part of her campaign to shift U.S. food aid programs from providing commodities to helping farmers in Africa and other food-scarce places grow more food themselves.

“A lot of people thought it wasn't possible” to increase food production in developing countries because the soil was deficient and it was hard to convince smallholder farmers to work together and accept new technology, Clinton said. But she said she persevered, telling the farmers that drought-resistant seeds “won't hurt them.”

But Clinton acknowledged that gaining acceptance for biotechnology “is painstaking” because proponents have to work both from the top down with presidents and prime ministers and from the bottom up with smallholder farmers.

There have been proposals to link foreign aid to those countries with laws accepting biotechnology, but Clinton said she believed such efforts would backfire.

Greenwood did not ask Clinton, a likely Democratic presidential candidate in 2016, to take a stand on the labeling of foods with ingredients derived from biotech crops, and she did not.

Greenwood told Clinton that a label reading “genetically modified” doesn't give the consumer “any useful information” and then added, “You don't need to answer that.”

Greenwood also told Clinton he believes organic farmers and food businesses are funding the efforts to require labeling because they want consumers to choose their products instead.

Clinton did not respond directly to that statement but said “the question of genetically-modified food or hybrids has gone on for many, many years” and there is a “big gap” between the facts and perceptions in that debate.

Greenwood also noted that BIO members produce biofuels, which they believe are a critical part of the answer to the greenhouse gas problem, but that some people oppose biofuels and think the concern about greenhouse gases is a hoax.

Clinton took that statement as an opportunity to discuss climate change in general.

She said she believes it is necessary to separate those people who are “dug in ideologically” and those who are favoring or opposing certain policies because it is in their short-term commercial and economic interests.

Clinton endorsed President Barack Obama's executive branch actions to address emissions from coal-fired power plants because the regulations will give the states that have more work to do more time to reach the goals.

At the same time, she said, there needs to be a fight against “the direct challenge from economic interests” that do not want states to continue their tax credits for renewables.

Clinton also criticized the press for giving climate change deniers a “false equivalency” with the overwhelming majority of scientists who have concluded that climate change is occurring.

“The debate is settled,” she said. “What is not settled is what we're going to do about it.”

Clinton also endorsed the “Risky Business” report released this week by former Treasury Secretary Hank Paulson and other leaders that calls on business and civic leaders to build expectations about climate change into their risk analyses.

Asked by Greenwood, a former Republican congressman from Pennsylvania, what she thinks about the way foreign countries lure scientists and biotech companies with capital and tax breaks, Clinton said she believes U.S. companies are going to see “more and more state capitalism coming from the other countries” and that the nation has to find a way to address the challenge.

“We will face competition that is state-based and underwritten, and that poses a new set of problems,” she said.

The issue is not just the tax system, but “real subsidization for risky enterprises,” Clinton said.

“Is there any way for our system to imbed some kind of foundational assurance against risk that could be affordable and available?” Clinton asked.

There should be “intensive discussions” on this topic in Washington, she said, but if federal officials won't do that, she suggested the leaders of states “that are hosting biotech companies” might put proposals together.

“States have a role to play but we need a national framework,” she added.

Clinton's speech to BIO was her second to an agriculture-related group this month. On June 10, she spoke to the joint meeting of the Food Marketing Institute and the United Fresh Produce Association in Chicago.

At that event, Clinton praised United Fresh for its program to provide salad bars in schools and noted that “there is a debate in Congress” about whether to stick with the healthier meals rules imposed on schools under the 2010 Healthy Hunger-Free Kids Act. She did not specifically endorse sticking with the new rules, but said “the idea it is too expensive to provide healthy foods” is a “false choice.”

Clinton ended her comments by noting that a biotech company owner had told her that day at a book signing in La Jolla that there aren't enough women in biotech. Clinton said she promised her that she would make that statement at the meeting and added, “I think we can all do better.”