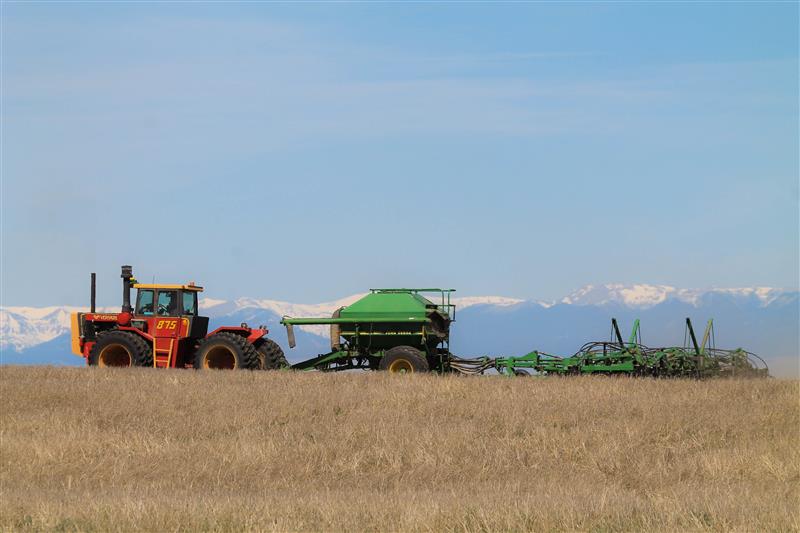 How Low Can Wheat Go?

ROCKVILLE, Md. (DTN) — After several days of rainfall, Kansas wheat farmer Rick Horton was spending the morning in his truck, hunting for fields dry enough to drill wheat. The time was right, but the weather was not cooperating.

In the 2016-17 crop year, farmers planted the smallest wheat crop in recorded U.S. history; now they are making decisions for the 2017-18 crop, and the market isn't promising. (DTN photo by Elaine Shein)

A nagging question hangs over Horton and other wheat farmers this fall: Should they bother?

“It's tough to keep gambling on planting corn-on-corn or milo-to-milo in western Kansas,” said Horton, whose family farms and runs Horton Seed Services near Leoti, Kansas. “Wheat has always kind of been the safe bet. But recently, it isn't.”

With wheat futures hovering in the mid-$4 range and cash prices closer to $3, wheat growers face a dilemma this fall. Wheat is unlikely to make a profit, but prices for corn, soybeans and sorghum — the obvious alternatives — are also depressed.

“It's kind of a dumpster fire right now, and the wheat one is burning the hottest,” said David Widmar, an agricultural economist with a group called Agricultural Economic Insights, as well as a researcher with the Center for Commercial Agriculture at Purdue University. “The last few years have been a search for the least bad alternative.”

Both Widmar and Horton agree that wheat acres are likely to slip again in the 2017-18 crop year. By how much and with what impact remain important questions.

THE CASE AGAINST WHEAT

From a simple yield perspective, corn, soybeans and sorghum have the potential to be more profitable alternatives than wheat. But in the semi-arid Great Plains, the residue that wheat stubble provides keeps erosion at bay, and the drought-hardy wheat plant remains a key rotational crop for growers there.

But a global glut of wheat and improved genetics in crops like corn, which allows them to be farmed with less water, have shaken up crop rotations and crop budgets in the Great Plains region for years, Widmar noted.

“One thing we watch closely is these nationwide crop budgets, and it's clear that wheat has just been the hardest hit of the traditional commodities during this downturn,” he said.

Horton is a passionate and dedicated wheat grower. His family routinely pushes wheat yields to impressive heights, and last year he won first place in the dryland winter wheat category of the National Wheat Yield Contest.

Yet even his operation trimmed its wheat acreage last year and is likely to do so again this year, he said.

“We're down a little bit more than last year, due to the fact that we planted corn back into some milo and corn stalks, where we normally would have been fallow going to wheat. So to bring wheat acres back up, we'd have to plant wheat into just-cut corn or go continuous wheat — and right now the market is telling us not to do that,” Horton said.

USDA recently announced that U.S. farmers will receive $8 billion from 2016 crop insurance programs. Some of those payments are for disasters like hurricanes, wildfires and drought, but many were triggered by low commodity prices and shrinking farm revenues.

“If you just sit down and look at your APH [Actual Production History], lock in your insurance price on a row crop next year, and look at wheat strictly from an insurance perspective — which I don't — row crops [like corn and soybeans] have at least a $110-per-acre advantage over wheat,” Horton estimated.

Wheat farmers will head into 2018 at the bottom of a three-decades-long slide in U.S. wheat acres.

“It's not unusual to see ups and downs in wheat acreage,” Widmar said. “But what is unusual is this long, sustained downward trend. What makes it unique is we've been losing about 800,000 wheat acres a year, for about 35 years.”

The slide became a cliff in the past two years, when U.S. farmers pulled wheat off nearly 9 million acres between 2015 and 2017. This year's planted wheat acreage of 46 million acres is the lowest in recorded U.S. history.

If Horton Seed Services' experience is any indicator, acres in 2018 will almost certainly be even lower, Horton said.

“There's no question wheat acres in western Kansas, at least, are going down again this year,” he said.

Widmar concurred, but added that huge drops like those between 2015 and 2017 — when wheat lost more than 4 million acres each year — are unlikely.

“It's a little difficult to imagine another 4-plus-million-acre adjustment in wheat acres, especially to the downside,” he said.

Why? The alternative crops of corn and soybeans simply aren't that attractive, in part because their acres have swelled as wheat has declined.

“If you're dumping nearly 9 million acres of wheat, those acres are going somewhere; farmers didn't idle them,” Widmar said. “We pushed those and then some into corn and soybeans. So in some ways, we've been pushing some problems straight into another one.”

To add to the over-production problem, 13 million acres have left the Conservation Reserve Program (CRP) since 2007, most heavily from states like Montana, North Dakota, Texas and Kansas.

Currently, the CRP cap sits at 24 million acres, an all-time low in the program's 30-year history. As Congress takes on the 2018 farm bill, it will face important questions about whether to increase, maintain or lower that cap, Widmar pointed out.

“All those millions of acres have gone into production and these are areas that traditionally raise wheat,” Widmar said. “So we're finding this struggle: We've increased production in the U.S. and globally when times are good; now how do we ratchet down?”