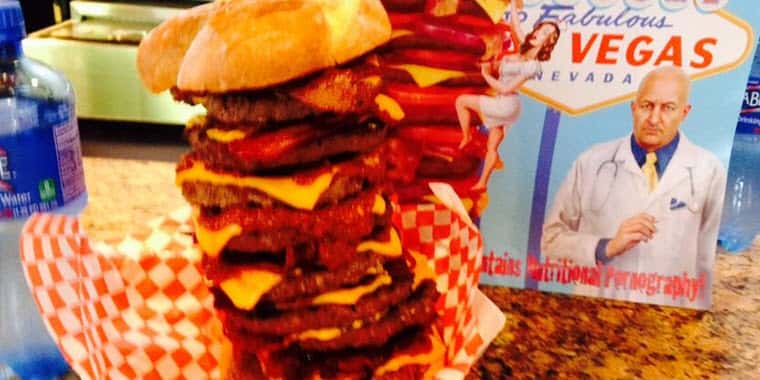 In Honor of National Burger Day, Meet the 20,000-Calorie Hamburger

For $21.28 and at the cost of some months off your life, you can enjoy the Octuple Bypass Burger at the Heart Attack Grill in Las Vegas. The burger weighs in at 19,900 calories.

The Octuple Bypass Burger has eight patties, which is 4 pounds of meat, 40 pieces of bacon, some chili and, of course, cheese. It’s about a foot and a half tall. It has enough calories in it to last a normal human being about 10 days. In the event you can’t finish it, the waitresses at the restaurant, who dress like nurses, get to spank you.

The Heart Attack Grill already set a Guinness World Record for the most calorific burger in 2013 with its Quadruple Bypass Burger, and now it’s breaking its own record.

If all that burger isn’t enough, the restaurant features a side of fries (which are cooked in pure lard) and a milkshake. Add that to your meal and the calorie count jumps by 2,428, to a total 12,410. And if for some terrible reason, that’s not enough food for you, you can always add more bacon to the burger.

BLM Plans for Public Lands Use vs Sage Grouse Released