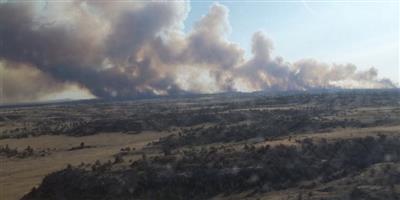 Billings, MT – The 2012 fires that raged across southeast Montana have not been forgotten by DNRC fire managers. In fact, this year’s hot and dry situation brings memories of the Dahl and Ash Creek Fires to the forefront of their minds.

“Currently we are more than two inches below the precipitation we saw at this time in 2012,” says Derek Yeager, Fire Management Officer with the DNRC’s Southern Land Office in Billings. “Though grasses are still showing signs of green, the recent hot temperatures could quickly change this.”

DNRC uses a resource called severity funding to align the agency’s capabilities with conditions when fire danger reaches high levels. Currently, the DNRC brought the following resources on and staged them in the region as a preparedness measure:

·        One dozer with transport, for quick mobilization to construct a mechanical line in order to corral fires in heavy vegetation. (Billings)

·        One additional Incident Commander to interface directly with local government fire agencies, support the use of DNRC resources, and/or serve as County Fire Advisor. (Billings)

·        One additional Division Supervisor for on-scene leadership with local government fire forces to assist them in organizing their response. (Billings)

·        One DNRC engine strike team, made up of five DNRC engines from Kalispell and Missoula, to assist with quick and effective initial attack to keep fires small while engines from local government fire agencies arrive. (Miles City)

“We are fortunate to have these resources available at this time and the dedication of local firefighters, however, it is particularly important to remember that the best wildfire is one that does not start,” emphasized Mike DeGrosky, Fire and Aviation Bureau Chief. “Extreme caution must be taken when working or recreating outdoors.”