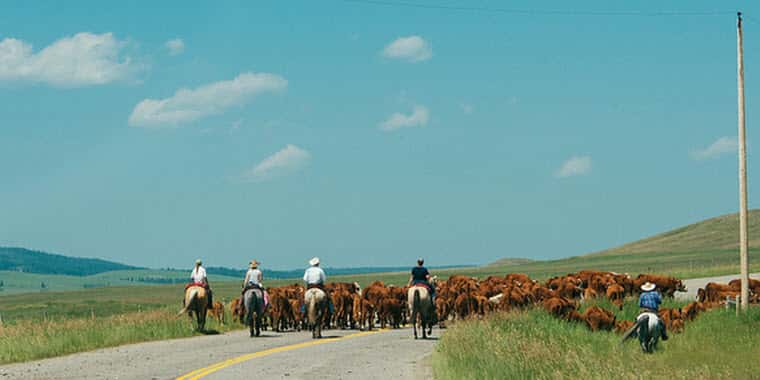 May 3, 2016
Billings, MT – The Ranchers-Cattlemen Action Legal Fund, United Stockgrowers of America (R-CALF USA) filed suit against the U.S. Department of Agriculture (USDA) today, alleging that the agency's Beef Checkoff tax, which collected more than $80 million in FY 2015, is being unconstitutionally used to promote international beef, to the detriment of U.S. beef products and producers. R-CALF USA, whose members are independent cattle producers across the United States, says that while its members must pay a $1per-head tax to the Checkoff program, funds from that tax are used to convince consumers that beef from R-CALF USA members' cattle – raised domestically and in compliance with rigorous standards concerning safety, treatment and quality – is no different than beef produced under far less stringent procedures abroad.
“The Checkoff's implied message that all beef is equal, regardless of where the cattle are born or how they are raised, harms U.S. farmers and ranchers and deceives U.S. citizens,” said R-CALF USA CEO Bill Bullard. “Despite what we know to be clear evidence about the high quality of beef raised by independent U.S. cattlemen, we are being taxed to promote a message that beef raised without the strict standards used by our members is the same as all other beef, a message we do not support and do not agree with.”
Under the Checkoff, all Montana cattle producers, including R-CALF USA's members, are required to subsidize the programs of the private Montana Beef Council, which is comprised of individuals closely aligned with some of the largest multinational, industrial cattle producers. In one promotion paid for by the Council, tax money was used to fund an advertising campaign for fast food chain Wendy's, in order to promote a product which could contain beef from 41 different countries. In addition, Checkoff funds have been used to advance the agenda of the National Cattlemen's Beef Association which promotes the idea that “beef is beef, whether the cattle were born in Montana, Manitoba, or Mazatlán.”
“This is not only a battle to protect constitutional rights but a battle to ensure that our food supply is not corralled and constrained by multi-national corporations leaving independent farmers and ranchers as mere serfs on their own land,” said Co-counsel for R-CALF USA J. Dudley Butler of Butler Farm & Ranch Law Group PLLC.
The group's suit, filed today in the U.S. District Court for the District of Montana, alleges the USDA's allocation of Checkoff funds violates the First Amendment by compelling R-CALF USA members to finance the private speech of the Montana Beef Council. The Council encourages a misperception among consumers that harms the business of independent producers. Those non-domestic beef products promoted by the Council, R-CALF USA says, are “less safe and less wholesome than those produced by the organizations' members and originate from cattle not raised using the U.S. cattle industry's rigorous animal husbandry practices” “Tax money being raised here in the U.S. is being used to advertise beef being raised under conditions that are not transparent and that our members have no control over,” Bullard added. “We're a non-profit association of proud, independent cattle producers from 43 different states who are committed to the safety and quality of our products. Our ranchers shouldn't have to pay for advertising blitzes benefitting multinational operators that seek to turn our food supply over to huge corporations.”
Public Justice, an impact litigation group, is also representing R-CALF USA. David S. Muraskin, a Food Safety and Health Attorney with the organization said that, “The Beef Checkoff program is using federal tax dollars to convince consumers that it does not matter where their dinner came from, or how it was raised. At a time of alarming food recalls and concerns about the health and safety of the food we eat, that's both irresponsible and troubling. This suit demands an end to that deception.”

In addition to Butler and Muraskin, R-CALF USA is also represented by Montana attorney Bill Rossbach of Rossbach Law PC.