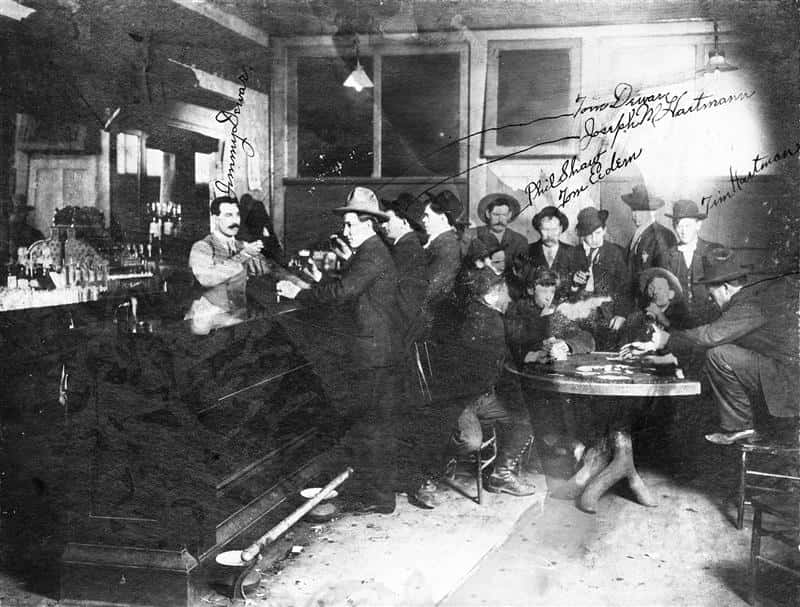 Photo of men in bar

Places like Dewar’s Saloon in Zortman could legally sell beer and wine again in April  of 1933. It took until December of that year to completely end Prohibition and allow sale of all alcoholic beverages. Establishments like Dewar’s had long been a part of Montana history.  Prohibition shut them down in 1920. “Bottoms up” news for those thirsty for a legal adult beverage.

When prohibition went into effect at the end of 1918, the Helena Independent had a front page story bemoaning the death of “King Barrleycorn.” The town was abuzz with people marking the end of legal liquor and the beginning of prohibition. It was reported that most saloons had sold out their liquor supplies even before they had to close their doors at midnight.

Lewistown's most lawless years were not during older days of a century ago. They were during the prohibition years of 1920-33 when the possession, making and drinking of alcoholic beverages were outlawed by the federal government.

This seems clear from research done by Lewistown's George Mueller who is retired now after a career with the federal weather service. He lives in the same house on Watson Street where he was raised. His father, the late Oscar Mueller, an attorney and Lewistown's mayor during prohibition's final years, played a key role in ending the lawlessness that dominated the city in those hectic days. “Whenever laws are made, there are always those to break them,” George Mueller said a few years ago in his report to the Outlook Club which he entitled, “Bootleggers and Crooked Cops.” And there were plenty of lawbreakers in Lewistown at the time.

“It seems like nearly everyone in Lewistown (during prohibition days) was making moonshine, buying it, or having Canadian beer and whiskey imported,” George Mueller said. “This practice gave rise to the name 'Bootlegger Trail' between Great Falls and Canada”

Montana Magazine of November-December 1979 reported it was fashionable then across the state to have some moonshine or home brew stashed away in hidden spots.

“There was more drinking of liquor by both young and old than before the passage of the 18th (prohibition) Amendment,” which seemed to be true all over the nation.

“There were numerous Lewistown residents, some prominent, operating stills in secret rooms and basements,” Mueller said.

“Next to farming, there was no single operation that had so many entrepreneurs.” Ingenious and unique places in homes were used to hide the illicit liquor such as trap doors, secret panels, chimneys, stairways and other places.

The moonshine was either good or bad. Probably most was bad. “One thing was sure. It was powerful. A number of deaths were recorded from drinking moonshine.”

Folks had a sense of humor about the quality of their moonshine, with many tests reported. One was to put a finger in the bottle or jug for three minutes. When pulled out, if the fingernail was missing, the moonshine wasn't a good buy.

From the PBR to Your Pasture