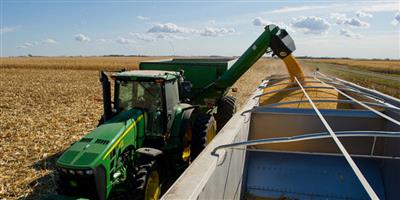 (DTN) — A federal judge in Wisconsin has ordered USDA to at least temporarily halt as much as $4 billion in loan debt relief payments to minority farmers in response to a lawsuit filed by white farmers who were not eligible for the same debt relief.

The case is just one of at least five federal lawsuits now filed against Agriculture Secretary Tom Vilsack to block USDA from paying off loans for minority farmers without also paying off loan debt for white farmers.

U.S. District Judge William Griesbach issued a temporary restraining order Thursday blocking USDA from paying any loan debt to socially disadvantaged farmers while the U.S. District Court for the Eastern District of Wisconsin considered a more extensive preliminary injunction request filed by attorneys for 12 white farmers and ranchers from Arkansas, Kentucky, Iowa, Minnesota, Missouri, Ohio, Oregon, South Dakota and Wisconsin who had joined a lawsuit against USDA’s debt-relief program. The plaintiffs in the case would each be eligible for loan forgiveness under the program except for their race.

USDA had announced in late May that the department would start paying off as much as $4 billion in loan debt immediately for as many as 16,000 minority farmers and ranchers. Under the loan provisions, USDA will pay off loan debt for socially disadvantaged farmers for FSA direct loans, FSA guaranteed loans with private lenders, Commodity Credit Corporation loans, or farm storage facility loans that had a debt balance as of Jan. 1, 2021. USDA officials noted loans closed after Jan. 1, 2021, are not included in the loan payment plan.

The lawsuit was filed by a conservative legal group, the Wisconsin Institute for Law & Liberty (WILL), and is one of two cases filed against USDA’s loan forgiveness program. Texas Agriculture Commissioner Sid Miller filed a similar lawsuit in Texas over the loan program.

“The Court recognized that the federal government’s plan to condition and allocate benefits on the basis of race raises grave constitutional concerns and threatens our clients with irreparable harm,” said Rick Esenberg, president of WILL and general counsel. “The Biden administration is radically undermining bedrock principles of equality under the law. We look forward to continuing this litigation but urge the administration to change course now.”

A spokesman for USDA issued a statement Friday citing that department officials disagree with the judge’s restraining order, but confirming that the debt-relief program has been put on hold.

“We respectfully disagree with this temporary order, and USDA will continue to forcefully defend our ability to carry out this act of Congress and deliver debt relief to socially disadvantaged borrowers. When the temporary order is lifted, USDA will be prepared to provide the debt relief authorized by Congress,” a spokesman for USDA stated to DTN.

The Association of American Indian Farmers and the National Black Farmers Association also filed joint briefs in both the Wisconsin and Texas cases. The groups oppose the injunctions against USDA’s loan repayment. The groups argue the court must now weigh the impact on socially disadvantaged farmers and ranchers by delaying any relief they were expected to receive under the program.

At least three other cases also have now been filed against USDA in Florida, Tennessee and Wyoming, asking for injunction against the department from moving forward.

The loan repayment program came following the American Rescue Plan passed in March that included a provision specifically providing for up to 120% debt relief for farmers with USDA loans who are defined as socially disadvantaged under a 1990 definition created by Congress that includes farmers who are African American, Latino or Hispanic, American Indian, or Alaskan Native, Asian American, or Hawaiian or Pacific Islanders. Caucasian women, who are eligible to apply for loans as socially disadvantaged since 1992, are not included in the debt relief under the provision passed by Congress in March.

The debt relief was driven by legislation initially introduced by Sens. Cory Booker, D-N.J., and Raphael Warnock, D-Ga., who championed the Justice for Black Farmers Act to address long-standing problems of discrimination by USDA that left thousands of Black farmers with outstanding loan debts at FSA. The debt relief provision stated USDA would pay all outstanding debt for USDA direct and guaranteed loans for socially disadvantaged farmers as of Jan. 1, 2021.

A DTN review of FSA loan debt showed socially disadvantaged farmers had $2.67 billion in total loan debt as of Dec. 31, 2020, along with $414.9 million in delinquent debt.

When looking at all Farm Service Agency loans and loan guarantees, there were 144,802 total borrowers at the end of 2020 with $31.7 billion in total outstanding debt. Republican members of the House Agriculture Committee had raised concerns during a hearing on the bill that if USDA were to lose a court case, then the department would be required to pay off all those loans.

In an op-ed written last week in USA Today, Wisconsin dairy farmer Christopher Baird — one of the plaintiffs in the case — wrote about his 80-acre farm and 50 to 60 jersey cows he milks in Crawford County, Wisconsin. He noted that if the loan forgiveness program was based on any criteria other than race, then he would qualify to have almost $200,000 in federal loans forgiven, plus 20%.

“There’s an argument for loan forgiveness for individuals, depending on individual circumstances or individual qualities,” Baird co-wrote in the op-ed. “But making this broader eligibility based on race, simply the color of one’s skin, is not COVID-19 relief and it has no place in government. It is the very problem that it purports to be trying to fix. It’s using racism against prior racism. That’s not right. Most of us learned as young children the phrase ‘two wrongs don’t make a right;’ it is truly disappointing that our leaders have forgotten such an elementary lesson.”

Agriculture Secretary Tom Vilsack has argued USDA paid out tens of billions of dollars in CFAP aid last year — $30.7 billion, according to the Congressional Research Service — but minority farmers received just 1% of that aid. Vilsack wrote in his own May column, “The reason the payments went so overwhelmingly to white producers is because the system is so stacked against farmers of color. Most farm programs are based on size of an operation and its history of output.”